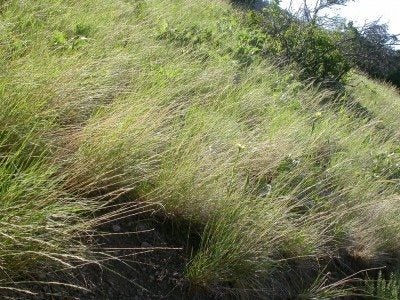 I grew up just near the Idaho border and was a frequent visitor to Montana, so I am used to seeing livestock grazing and I forget that not everyone is. Nor do they have any idea how the cattle that become the steak they are grilling are raised and fed. Ranchers in the northwestern states graze their cattle on a number of grasses, among these include bluebunch wheatgrass. No, this isn’t the wheatgrass you drink at a health spa. So, what is bluebunch wheatgrass? Keep reading to learn more.

Bluebunch wheatgrass is a perennial native grass that attains a height of between 1 and 2.5 feet (31-76 cm.). Agropyron spicatum grows well in a variety of habits but is most commonly found in well-drained, medium to coarse soil. It has a deep, fibrous root structure that makes it well adapted to drought conditions. In fact, bluebunch wheatgrass will flourish with only an annual rainfall of between 12 and 14 inches (31-36 cm.). Leaves remain green throughout the growing season with sufficient moisture and the nutritional value to grazing cattle and horses is good until the fall.

There are bearded and beardless subspecies. This means some varieties have awns, while others do not. The seeds alternate within the seed head looking much akin to wheat. The grass blades of growing bluebunch wheatgrass may be either flat or loosely rolled and are around 1/16th of an inch (2 mm.) across.

Bluebunch wheatgrass greens up early, grows in many soil types, and during early fall snowstorms is a valuable forage source for livestock. Montana’s range fed cattle and sheep contribute 700 million dollars gross to the state’s economy. It’s no wonder bluebunch wheatgrass has had the distinction of being Montana’s official state grass since 1973. Another interesting bluebunch wheatgrass fact is that Washington claims the grass as theirs as well!

Bluebunch can be used for hay production but is better utilized as forage. It is suitable for all livestock. The protein levels in the spring can be as high as 20% but decreases to around 4% as it matures and cures. The carbohydrate levels remain at 45% during the active growing season.

Growing bluebunch wheatgrass is found throughout the northern Great Plains, Northern Rocky Mountains, and the Intermountain region of the western United States often amongst sagebrush and juniper.

While bluebunch is an important forage grass, it doesn’t withstand heavy grazing. In fact, grazing should be deferred for two to three years after planting to ensure establishment. Even then, continuous grazing isn’t recommended, and rotation grazing should be utilized with spring grazing one out of three years and no more than 40% of the stand being grazed. Early spring grazing is the most damaging. No more than 60% of the stand should be grazed once seed ripens.

Bluebunch wheatgrass usually spreads via seed dispersal but in areas of high rainfall, it may be spread by short rhizomes. Usually, ranchers periodically regenerate the grass by tilling seeds to a depth of ¼ to ½ inch (6 mm. to 1 cm.) or doubling the number of seeds and broadcasting them over areas that are inhospitable. Seeding is done in the spring on heavy to medium textured soil and in the late fall for medium to light soils.

Once the seeding has been accomplished, there is very little care required for bluebunch wheatgrass other than a quick prayer for occasional rainfall.