Bracken Ferns
By: Becca Badgett, Co-author of How to Grow an EMERGENCY Garden
Printer Friendly Version 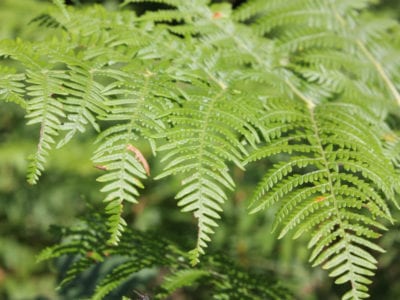 Bracken ferns (Pteridium aquilinum) are quite common in North America and native to many areas of the United States. Bracken fern information says the large fern is one of the most prevalent ferns growing on the continent. Bracken fern in gardens and in woodland areas may be located in all states, except Nebraska.

Bracken fern uses may be somewhat limited in the garden, but once you’ve found the right spot and the proper use for them, they are easy to get started. Growing bracken fern in gardens is often not a good idea because it can usually outcompete other plants growing in the same area.

Bracken ferns in gardens and other areas are attractive plants with delicate-looking fronds. Plants normally reach from 3 to 4 feet (1 m.) in height, but they may grow up to 7 feet (2 m.). The fronds appear early in spring. Foliage grows from underground rhizomes that spread quickly, so much so that most other plants attempting to share the same soil are occasionally quickly overtaken. If one of your chosen bracken fern uses is as part of a woodland garden, expect them to spread through the wooded area.

Bracken fern uses may be in rock gardens, edging for wooded areas, and anywhere a large, ferny specimen is needed and will not crowd out most ornamentals. Other woodland plants which can grow successfully with bracken ferns include:

Aside from spreading rhizomes, bracken fern information says the plant multiplies from dropped spores that fall from the feathery fronds. Bracken fern uses in your landscape may be growing them in containers to limit their spread. The plant should be grown in a large pot or one that is buried to curtail the spread of the rhizomes.

Bracken ferns are poisonous, so plant them out of the way of livestock and wildlife. Some info about the plant suggests that it should not be cultivated, but bracken fern toxicity usually occurs when the fern is harvested along with food grown for livestock. If you think your pet has ingested bracken fern, contact poison control or your veterinarian.