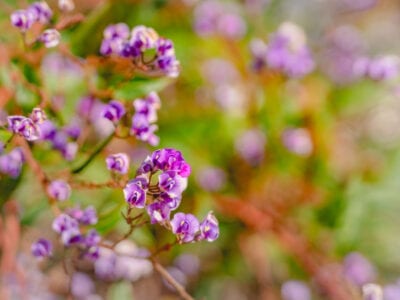 Hardenbergia coral pea appears as a woody, climbing evergreen with dark green leather-like leaves blooming in a mass of dark purple blooms. Coral pea tends to be leggy at the base and profuse towards the top, as it clambers over walls or fences. In southeast Australia, it grows as a ground cover over the rocky, shrub filled environment.

The moderately growing Hardenbergia coral pea vine is a perennial attaining lengths of up to 50 feet (15 m.) and is used in the home landscape as a climbing accent grown on trellis, houses, or walls. Nectar from the blooming vine attracts bees and is a valuable food source during the late winter to early spring when food is still scarce.

How to Grow Hardenbergia Coral Pea

Hardenbergia may be propagated via seed and requires acid scarification and pre-soaking in water at least 24 hours before sowing due to its hard seed coat. Hardenbergia also needs to germinate in warm temps of at least 70 degrees F. (21 C.).

So, how to grow Hardenbergia coral pea? Coral pea vine thrives in sunny to semi shaded positions in well drained soil. Although it tolerates some frost, it prefers more temperate temperatures and will do well in USDA zones 9 through 11 with protection from frost; damage to the plant will occur if temps fall below 24 degrees F. (-4 C.).

Other information on coral pea care is to plant in an area with western sun exposure (partial sun-light shade). Although it will stand full sun and flowers most profusely in it, coral pea prefers cooler areas and it will burn if planted in full sun surrounded by reflective concrete or asphalt.

Some varieties of coral pea are:

Coral pea comes in dwarf varieties as well and is relatively disease and pest resistant. A newer variety with a shrub-like habit is called Hardenbergia ‘Purple Clusters,’ which has masses of purple flowers.

Water regularly and allow the soil to dry between irrigations.

Generally there is no need to prune growing coral pea vines except to corral their size. It is best to prune in April after the plant has bloomed and one-third to one-half of the plant may be removed, which will encourage compact growth and coverage.

Follow the instructions above and coral pea will reward you with lovely flowers in late winter to early spring.