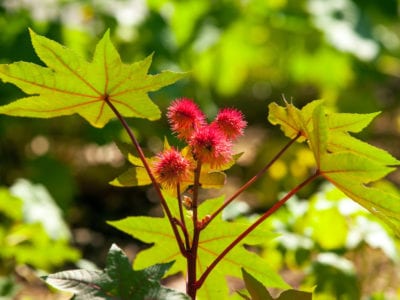 Castor bean plants (Ricinus ommunis) are native to the Ethiopian region of Africa but have been naturalized in warm climates all over the world. Commonly found in the wild along stream banks and  riverbeds on low lying areas, this aggressive vine is the source of one of nature’s best natural oils, castor oil.

As far back as 4,000 B.C., castor beans have been found in ancient Egyptian tombs. The valuable oil from this tropical beauty was used thousands of years ago to light lamp wicks. Castor bean plantation businesses still exist today, though mainly in tropical regions.

Many varieties of ornamental castor beans are available and make a bold statement in any garden. In tropical regions, it grows as an evergreen shrub or tree that can reach 40 feet (12 m.) in height. In warm areas, this striking plant is grown as an annual. This plant can grow from seedling to a 10-foot (3 m.) tall plant by the end of the summer but will die back with the first frost. In USDA planting zone 9 and above, castor bean plants grow as perennials that look like small trees.

Soak seeds overnight to aid with germination. In warmer areas, or once the soil can be worked and the threat of frost has passed, castor bean seeds can be sown directly into the garden.

Due to its large size, allow enough room for this fast-growing plant to expand.

The toxicity of this plant is another important aspect of castor bean information. The use of castor bean plants in cultivation is discouraged because the seeds are extremely poisonous. The alluring seeds are tempting to young children. Therefore, growing castor beans in the home landscape is not a good idea if you have children or pets. It should be noted, however, that the toxins do not pass into the oil.