Learn About The Oldest Potted Plant In The World 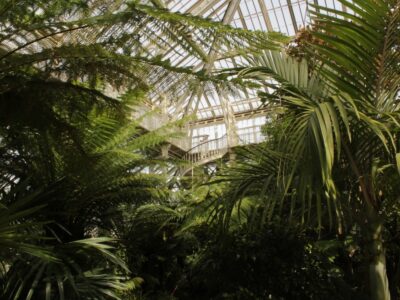 On average, potted plants are expected to live about 2 to 5 years, which makes the Eastern Cape giant cycad (Encephalartos altensteinii) at the Kew gardens in London so spectacular. Deemed the oldest container plant in the world, this South African native arrived at Kew in 1775.

What is an Eastern Cape Giant Cycad?

Looking like a cross between a tree and a fern, Cycads are some of the oldest living flora species on the planet. The crown is made up of whorls of leathery, palm-like leaves. The non-branching trunk is formed as the plant grows and sheds leaves. The specimen at Kew is over 13 feet tall (4 m.). Its trunk leans to the side and must be braced as it can no longer support the weight of itself.

The Cycad genus has been around since the age of dinosaurs. Once an abundant and widespread plant, all species of Cycads are classified as vulnerable. Some are also listed on Appendix 1 of CITES. Trade of these species is only permitted under exceptional circumstances.

Like most plants in the genus, the Eastern Cape giant cycad is a slow-grower. The specimen at Kew averages 1 inch (2.5 cm.) of growth per year. In lieu of flowers, cycads produce cones, many of which are quite decorative. In the almost 250 years it has been at Kew, the oldest potted plant has only produced one cone.

It should be noted that in the Cycad genus, the male and female reproductive organs are on separate plants. Beetles and small bees are the most common pollinators of the cones. After ripening, the cone opens to reveal large seeds.

As one of London’s most popular attractions, the Kew Gardens house more than 50,000 different plants on 300 acres (121 ha). Visitors can explore the gardens on foot or take the land train to five key destinations on the property. There is an admission fee. To see everything these botanical gardens have to offer, plan on at least a three to four hour stay.

The cycad at Kew is located in the southern end of the Palm House. This humongous glass structure was built in 1844 to house tropical and subtropical plants. The hot, humid environment inside the Palm House is similar to the climate in a rainforest and can be a bit uncomfortable during the summer months.

If you can’t visit the Kew Gardens, you can still enjoy Cycad houseplants. One of the most common species is the Sago Palm (Cycas revoluta). Native to southeastern Japan, these attractive plants have leathery green frond-like leaves and a shaggy, oval trunk.

Sago palms grow best in bright light and moderate to dry soil. They don’t mind being rootbound, but they will need a little extra water when actively growing. These Cycads prefer a humid environment like a bathroom. In dryer rooms, mist the leaves or place the pot on a bed of wet stones.

Like other Cycads, Sago Palms are dioecious and can take 15 to 20 years to produce either male or female cones. A faster method of propagation is to remove and pot the pups when they appear around the base of the plant. Be sure to use gloves as Sago Palms are poisonous.

Sago Palms are low-maintenance plants. Nonetheless, if you properly care for a Sago Palm, in another 250 years you could be known as the person who once owned the oldest houseplant in the world.