How To Care For Sago Palms 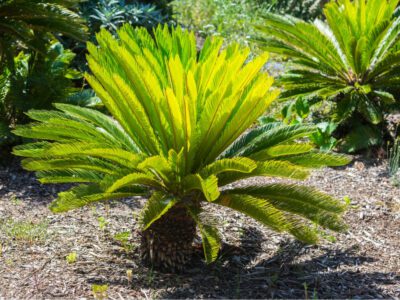 The sago palm (Cycas revoluta) is a popular houseplant known for its feathery foliage and ease of care. In fact, this is a great plant for beginners and makes an interesting addition to nearly any room. It can even be grown outdoors. While the name might imply that it is a palm, this plant is actually considered a cycad, one of the oldest groups of plants dating back to prehistoric times — hence the plant’s hardiness.

How to Care for Sago Palms

Sago palms are easy to care for but do require special needs, such as bright light, although they will tolerate low-light conditions. What they will not tolerate, however, is too much moisture. Sago palms prefer to be situated in well-drained soil, and like other cycad plants, they do not respond well to overwatering. In fact, too much water can quickly lead to root rot and eventual death. Therefore, it’s best to allow the plant to dry out some between waterings.

Sago palm plants also require regular fertilizing monthly to ensure vigorous health and encourage sago palm blooms. However, these plants might take 15 years before they bloom in containers (if at all), at which time the sago palm blooms only about every third year (on average). This often takes place in late spring.

While sago palms, for the most part, are problem free plants, you may on occasion encounter problems with sago palms. One of the most common complaints is sago palm yellowing. However, as is the case with most cycads, this is a normal reaction as the plant conserves nutrients — with older leaves turning yellow and then brown.

On the other hand, if sago palm yellowing occurs with new growth, this could signal a nutrient deficiency. Insects can be another factor, as these plants are well known for harboring pests like scale bugs. Newly planted sago palms that suffer from yellowing may be the result of improper planting or poor drainage.

How to Treat Sick Sago Palms

Once you have determined the cause of sago palm yellowing, you’ll need to know how to treat sick sago palms effectively. For nutritional deficiencies, try feeding sago palms houseplant fertilizer regularly, about once a month. Regular balanced fertilizer is important for healthy maintenance of sago palms.

If scale infestations are a problem, try using the tips found in the following article: How to Control Plant Scale. You could also try handpicking them off or placing them outdoors to allow their natural predators to help eliminate the problem.

When problems with sago palms are due to improper planting or poor drainage, you’ll need to repot the planting as soon as possible in suitable soil, not too deep, and with adequate drainage available.

DISCLAIMER: It should be noted that all parts of this plant are considered toxic to both humans and pets if ingested, so caution should be taken if you are growing sago palms around small children and pets (specifically cats and dogs).

Printer Friendly Version
Read more about Sago Palms
Next>
Did you find this helpful? Share it with your friends!
FacebookTweetPinEmail
Related Articles
Newest Articles
You might also like…
Additional Help & Information