Care Of Papyrus Plant – Growing Papyrus In The Garden 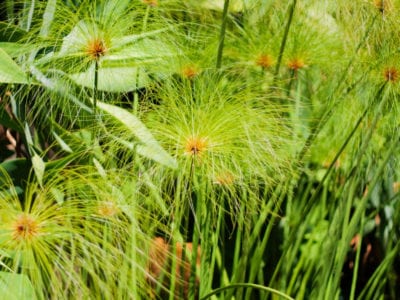 Papyrus was one of the most important plants in ancient civilized Egypt. Papyrus plants were used as paper, woven goods, food, and fragrance. Papyrus grass is in a genus of over 600 different plants from around the world. The plant is considered a sedge and favors moist, warm environments. You can grow papyrus from seed or division. In most zones, papyrus is an annual or half-hardy perennial. This fast growing plant would be an excellent addition to a water garden or naturalized bog area.

There are numerous names for papyrus grass. What is papyrus? It is a plant in the genus Cyperus, which is native to Madagascar. Umbrella plant or bulrush are other names for the plant. Papyrus plant is suitable for USDA plant hardiness zones 8 to 10 and requires a full sun location, in shallow water or riparian areas.

How to Grow Papyrus

The plant is called umbrella plant because it has a grass-like habit with sprays of foliage at the top of the stems. These sprays of foliage radiate out like the spokes in an umbrella. Papyrus can grow up to 10 feet (3 m.) tall from rhizomes. The stems are rigid and triangular and have a white pith inside. The pith is the source of papyrus paper. Papyrus has no frost tolerance and should be moved indoors for the winter.

Papyrus grass is easy to grow. It prefers full sun but can also be raised in partial shade. Papyrus is usually planted by rhizomes in moist, fertile soil in pots and then submerged in an aquatic environment. It can also be planted directly into 3 feet (1 m.) of muddy substrate to hold the heavy stems upright.

The plant needs to be kept moist, if not submerged. Papyrus seeds do not readily germinate and can take a month or more to sprout. Even in their native conditions, the plant does not easily spread by seed. Papyrus need little extra care to thrive, provided it is kept moist. Mulching in zone 8 can help protect the tender roots but the foliage will likely die back in winter.

Pruning is not necessary except to remove errant or broken stems. You can give it a balanced fertilizer in spring to support the growth of the huge stems.

Papyrus grass has no damaging pests or diseases except rust fungus, which will discolor the stems and foliage. In the correct zones with light and moist conditions, care of papyrus plant is easy for even a novice gardener.

You can grow and share your papyrus plant through division in spring. Wait until the danger of frost has passed and un-pot or dig up the plant. Cut apart the papyrus rhizomes into groups of two or three. Re-pot the new plants and grow them as usual.