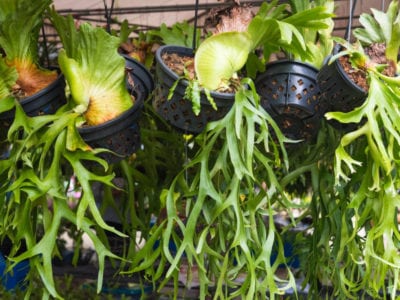 The staghorn fern is a unique and beautiful epiphyte that grows well indoors, and in warm and humid climates outdoors. It’s an easy plant to grow, so if you get one that thrives and gets large, knowing how to divide a staghorn fern successfully comes in handy.

Can You Split a Staghorn Fern?

This is a unique type of plant, being both an air plant and a fern. Native to rainforests, this tropical fern doesn’t exactly look like other ferns you may be more familiar with. Splitting staghorns may seem complicated or difficult, but it really isn’t. You can and should divide this fern if it is getting too large for its growing space or if you want to propagate it.

When to Divide a Staghorn Fern

Your staghorn ferns have two types of fronds: sterile, or immature, and fertile. The fertile fronds are the ones that branch like antlers. The immature fronds do not branch and form a shield or dome at the base of the plant. The roots are behind this shield, which start out green and turns brown as the plant grows. The fertile, branching fronds emerge from the shield of immature fronds.

You will also see offsets, entirely separate plants with both the shield of immature fronds and the fertile fronds, growing from the main plant. These are what you will remove to divide the fern. Dividing staghorn ferns is best done just before the plant’s active growing season, so in the early spring, although it is possible to do it at any time of year.

How to Divide a Staghorn Fern

When you’re ready to divide your staghorn fern, look for an offshoot and the stem or root that connects it to the main plant. In most cases, you should be able to twist or gently pull the offshoot free, but you may need to get a knife in there to sever the attaching root. This doesn’t hurt the plant at all but be sure that you are ready to mount the offshoot right away. If you let it sit for too long, it will die.

Splitting staghorns is much easier to do than it may seem at first. If you have a big plant, it can look as if it is a complicated mass of roots and fronds, but if you can separate an offshoot, it should come off easily. You can then remount it and enjoy a new, separate staghorn fern.

Printer Friendly Version
Read more about Staghorn Ferns
<PreviousNext>
Did you find this helpful? Share it with your friends!
FacebookTweetPinEmail
Related Articles
Newest Articles
You might also like…
Additional Help & Information