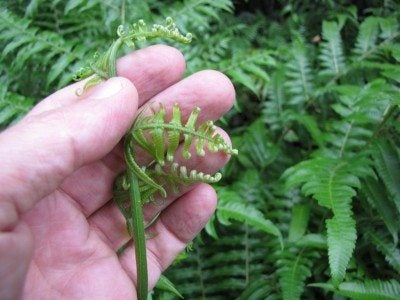 Nature has surprises around every corner, and the vegetable fern is a perfect example of this. What is a vegetable fern? Keep reading to learn more.

What is a Vegetable Fern?

The vegetable fern plant (Diplazium esculentum) is a species found and used in east to south Asia and Oceania. It is a cold sensitive plant suitable for the warmer regions and tender to freezing temperatures. Are vegetable ferns edible? You better believe it! It is an edible plant harvested and eaten in its native regions. The young fronds are the stars on this plant, as the tender young growth is a delicious addition to stir fries and other veggie rich dishes. Harvest them in early spring and use them as you would asparagus for nutrient dense and delicious wild eats.

Ferns of some type are very common in most regions. Their preference for moist, partially shady sites indicates that ferns are forest dwellers and, indeed, this is true for most species. The vegetable fern plant is a familiar food at markets in its native countries. The plant should not be confused with other varieties of ferns, however. It’s classified as Diplazium esculentum, which is a completely different species from look-a-likes such as Ostrich ferns. The vegetable fern plant is an evergreen that thrives on poor soils where there is plentiful moisture.

Deplazium esculentum is grown from rhizomes as a harvest crop. The spores also freely implant in humus rich, moist soils. Distribution is widespread and even invasive in regions where there is plentiful heat, water, and light shade. The plants prefer acidic soil and thrive in hot conditions.

Most of the fern’s habitat is lower story forestry but it is also found in irrigation ditches and roadside gulleys. An interesting side note of vegetable fern info is its introduction to non-indigenous regions, where it has naturalized. It is something of a pest plant in areas of Florida and humid southern states of the United States.

You can find bundles of the crisp, yet tender, new fronds in Asian markets. In indigenous regions, Diplazium esculentum uses include light blanching as a leafy green vegetable, addition to stir fry or part of a soup or stew. The fiddleheads are also pickled. It is widely found in the Philippines and other parts of tropical Asia, such as India and the Bengals, as part of the daily diet. The fern is high in beta carotene and also contains a percentage of Vitamin E and riboflavin.

The vegetable fern plant is a harvested crop that is either blanched, boiled, or stir fried and, in some cases, pickled. Often compared to the flavor of overcooked asparagus, the young fronds are generally cooked before consumption to avoid bitterness. Sometimes the fronds are dried and then reconstituted for cooking.

In India it is an essential ingredient in jhol curry and in the Philippines, it is called Paku and a dietary staple. In Japan it is used in stir fry and bears the common name kuware-shida in the marketplace. Pickled, the curled new leaves are the basis for spicy condiments.