Growing Yellow-Eyed Grasses In The Garden 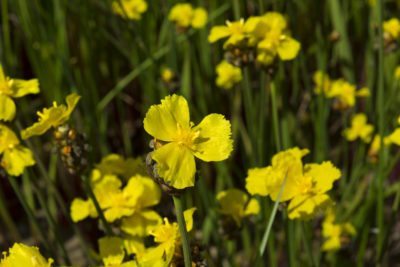 Yellow-eyed grass plants (Xyris spp.) are herbaceous, wetland plants with grassy leaves and narrow stalks, each bearing one or two, three-petaled yellow or white flowers at the very tip. The yellow-eyed grass family is large, containing over 250 species found across the world. Although hardiness varies, most yellow-eyed grass varieties are suitable for growing in USDA plant hardiness zones 8 and above. Read on to learn how to grow yellow-eyed grass in your garden.

Transplant the seedlings into a sunny garden spot after all danger of frost has passed in spring. If your climate is hot, yellow-eyed grass benefits from a little afternoon shade.

If conditions are favorable, yellow-eyed grass will self-seed.

Divide yellow-eyed grass every two to three years. Early spring is the best time for this task.
Cut back foliage before new growth appears in early spring.

Northern yellow-eyed grass (Xyris montana): Also known as bog yellow-eyed grass or montane yellow-eyed grass, this plant is found in bogs, fens, and peatlands of the northeastern and north-central United States and Northern and Eastern Canada. It is threatened due to habitat destruction, changes in land use and recreational activities.