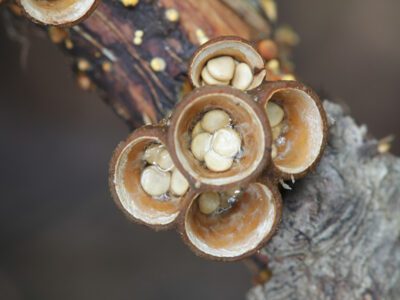 You will recognize why this species has its moniker the instant you set eyes upon it. Bird’s nest fungi in gardens look just like the avian habitats for which they are named. What is bird’s nest fungus? The tiny fungi aren’t dangerous to plants and help break down organic matter. Therefore, bird’s nest fungus control isn’t necessary unless the appearance wrecks your gardening feng shui.

What is Bird’s Nest Fungus?

Soil and organic debris are full of all kinds of marvelous natural composters. One of them, the bird’s nest fungus, is also a master of mimicry. It has the appearance of a cup-shaped nest with little spheres inside that resemble eggs. In fact, the spheres are the method through which the organism reproduces itself.

Whenever I see one of these little nests in my bark mulch, it makes me smile. They are magical little organisms with a unique reproductive strategy and wonderful composting abilities. Finding bird’s nest fungus in mulch is a common sight, as the fungi live off the organic substrate and turn it into rich soil. The cup shape is actually the fruiting body of the fungus and holds the lentil-shaped peridioles that contain the spores which are the basis of the saprophyte’s reproduction.

Bird’s nest fungi in gardens catch rain or irrigation water in the little fruiting cups, which are about ¼ inch (0.5 cm.) in diameter. The splash of the water ejects the peridioles 3 to 4 feet (1 m.), hopefully into hospitable terrain. They have a sticky membrane that catches onto a plant stalk, side of the house, or whatever is nearby and adhere. Once the peridiole dries, it releases the spore.

As a saphrophyte, bird’s nest fungi break down organic waste matter into rich compost. They take nutrients from the material and cause decomposition to increase nearly two-fold. This means the cleanup of the garden is much quicker with fungi and other decomposers in the landscape. Bird’s nest fungus in heavy bark mulch is especially helpful. They help reduce large chunks into easy to break down slivers that help enrich the soil and increase tilth.

Getting Rid of Bird’s Nest Fungus

The fungus doesn’t harm any living plants or organisms and assists in the important cycle of soil renewal. For this reason, getting rid of bird’s nest fungus is not necessary for the health of your garden. However, if the sticky fruiting bodies adhere to siding or other items, they can be difficult to remove. In this case, bird’s nest fungus control should consist of repelling tactics.

Reduce irrigation in areas of concern and rake the soil to disturb the organisms. You may also elect to install living mulch such as ivy or vinca, which will keep the fungus from taking hold of the debris underneath the thick mat of vegetation. As a rule, fungicides are not recommended to remove the fungus. Simple repellent tricks are much easier and safer in the landscape.