Common Mulch Fungus: Does Mulch Cause Fungus And Can It Be Treated 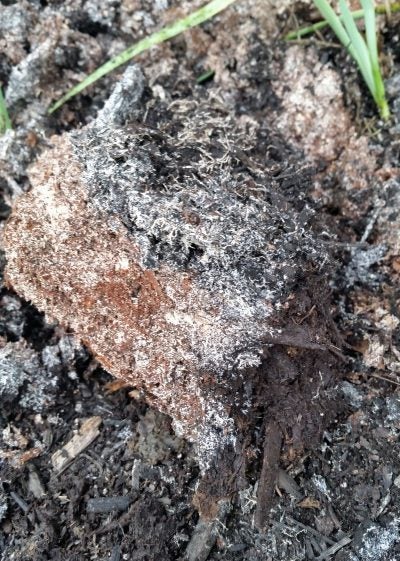 Most gardeners take advantage of organic mulch, such as bark chips, leaf mulch, or compost, which is attractive in the landscape, healthy for growing plants, and beneficial to the soil. Sometimes though, organic mulch and fungus go hand in hand. In fact, various fungi are natural components of this rich, organic environment.

Does Mulch Cause Fungus?

Mulch doesn’t directly cause fungus, but when certain conditions are present, mulch and fungus work together in a symbiotic relationship; fungi are living organisms that develop as part of the natural decomposition process.

Many types of fungi help break down woody tissues and other types survive by consuming bacteria in the mulch. Either way, fungus is beneficial so no mulch fungus treatment is necessary in most cases. As the fungi speeds decomposition, the decomposed mulch improves soil fertility by making nutrients more available to other plants. Decomposed mulch also increases the soil’s water retention capabilities.

Types of Fungus in Mulch

Both molds and fungus are a normal part of the decomposition process. Here is some of the most common mulch fungus seen in the landscape:

Mushrooms are a common, familiar type of fungus. You may see mushrooms in a variety of colors and in sizes ranging from tiny puffballs measuring less than an inch (2.5 cm.) to varieties that attain heights of several inches (8 cm.). Stinkhorns are commonly seen in mulch.

Some people think mushrooms are a nuisance, but they aren’t harmful in most regards. However, while some mushrooms are safe to eat, many are highly toxic– even deadly. If this is a concern, or if you have curious children or pets, rake or mow the mushrooms and dispose of them safely.

Slime molds, also known as “dog vomit,” tend to be nuisances, but their growth is usually confined to small areas in damp mulch or old, rotting logs. Slime mold is easily recognized by its bright pink, orange, or yellow color.

As mulch fungus, treatment of slime mold involves raking the surface of the mulch frequently to prevent growth. You can also remove the slimy substance with a rake, then dispose of it away from your yard. Otherwise, let the mold complete its natural lifespan and it will dry out, turn brown, and become a powdery, white mass that is easily blasted with a garden hose.

Bird’s nest fungi looks exactly like their name suggests–tiny bird nests complete with eggs in the center. Each “nest” measures up to ¼ inch (6 mm.) in diameter, growing in small clumps usually limited to a few inches (8 cm.). This interesting little fungus is harmless and nontoxic.

Artillery fungus resembles a tiny cup with one black egg in the center. Artillery fungus is named for its sticky spores that burst and can be windblown considerable heights and distances.

Although this fungus grows in mulch, it is also attracted to light-colored surfaces, including cars or houses. The spores, which resemble specks of tar, can be difficult to remove. Other than its annoying, unsightly qualities, it isn’t harmful to plants, pets, or people.

There is no known cure for artillery fungus. If this fungus is a problem in your area, avoid using wood mulch adjacent to buildings. If mulch is already in place, rake it often to keep it dry and aerated. Large chunks of bark are less inviting than shredded mulch or small pieces.