Mushroom Identification – What Are Fairy Rings, Toadstools, And Mushrooms? 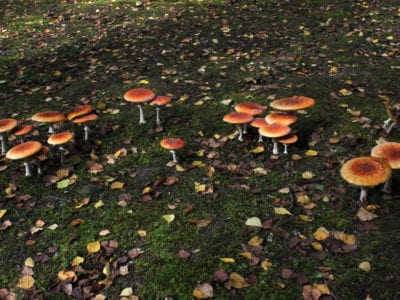 Mushrooms are sometimes an annoyance to homeowners who do not welcome them in their gardens or lawns and often wish to get rid of them. However, mushrooms are considered decay fungi and make quick work of organic matter, such as thatch in lawns or compost materials. Their presence in the lawn and garden greatly improve the quality of soil. How does one distinguish between various types of mushrooms though? Continue reading to learn more about mushroom identification.

A real mushroom is in the shape of an umbrella with a cup-shaped or flat cap on top of a stalk. Spores are produced by a group of cells, called basidia, found on the underside of the mushroom cap. While mushrooms come in all shapes, sizes, and colors the general structure remains the same.

These funny looking structures are actually fruiting bodies or flowers that are produced by fungi. The body of the fungus is actually underground. There are many kinds of fruit bodies that are not true mushrooms, including puffballs and morels. There are over 8,000 types of mushrooms found throughout the world. These include toadstools and fairy ring mushrooms.

Learning about mushrooms includes toadstool info. Many people are curious about the difference between a mushroom and a toadstool. In fact, the word is often used interchangeably. However, toadstools are actually considered poisonous mushrooms.

To be on the safe side, it is always best to consider all mushrooms as poisonous unless you are an expert at mushroom identification. Poisonous mushrooms, when eaten, can cause serious illness and in some cases even death.

What are Fairy Rings?

You’ve probably heard mention of fairy rings at some point or another. So what are fairy rings? Lawn mushrooms that form a distinctive arc or circle, especially in the lawn, are known as “fairy rings.” They are the result of a special fungus called fairy ring and there are between 30 and 60 different types of fairy ring fungi.

Fairy ring fungi feed on decaying matter in the lawn and tend to be worse in poor or sandy soil. Fairy rings can become very dense and kill grass. Good lawn aeration generally helps improve the quality of soil and reduce the presence of fairy rings.