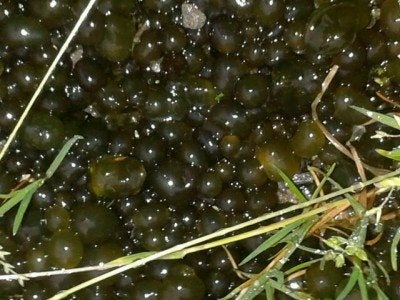 Image by Gardening Know How, via sinead

It’s easy to mentally divide the garden into plants and animals, but it’s not always that simple sometimes. Besides plant bacteria and the viruses that roam the world, there’s a remarkable organism known as the lichen that appears when conditions are right. If you’ve noticed a black, granular material in the soil around your plants or on your lawn and you’re certain it’s not worm castings, it’s probably tar jelly lichen.

What is Tar Jelly Lichen?

Tar jelly lichen is a creature unlike others you’ll encounter in the garden. They’re created by the intimate paring of a fungus and algae– and both are important to lichen growth. The algae synthesizes all day long, providing enough food for itself and the fungus involved, and the fungus keeps the algae moist so it can live a long, healthy life.

Although they’re fascinating, tar jelly lichen information is hard to come by. This is largely because they’re not garden offenders, so universities don’t spend a lot of time looking at them. Even so, there are lichen uses and benefits. For example, many wild herd animals use them to help replenish their colonies of digestive bacteria. Smaller animals may use them as a food source similar to a mushroom. Many common dyes are also made from lichens.

Despite their unusual appearance, tar jelly lichen are not dangerous in your garden. In fact, because they fix their own nitrogen from the environment, they can be really helpful to your plants. When it rains, nitrogen is leached from tar jelly lichen colonies, both living and dead. These early colonizers are often the first on the scene at barren, disturbed sites like abandoned construction projects. Their nitrogen contribution can help tougher green plants get a foothold in these desolate places.

However, just because tar jelly lichens are great for your garden, they’re not necessarily great for you. Many lichens are poisonous, and those that aren’t are incredibly unpalatable, though they’ve been used as food additives in various cultures. The biggest problem with eating tar jelly lichen is that several species look very similar, which is the beginning to a recipe for disaster. Like with small brown mushrooms, you have to really know your black lichens if you want to attempt to eat them.

Most gardeners are content to sit and admire these fancy, amazing examples of natural cooperation when they appear in the soil. However, if lichens aren’t in your plans, you can at least feel confident turning them over the soil and reaping the benefits of their nitrogen-fixing work.