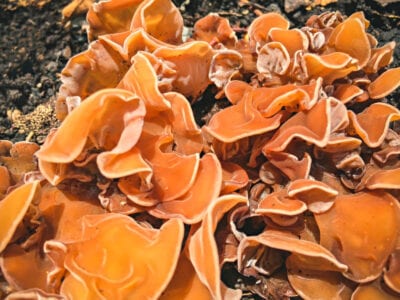 If you’ve ever come across a fungus reminiscent of an orange looking cup, then it’s likely orange fairy cup fungus, also known as the orange peel fungus. So exactly what is orange peel fungus and where do orange cup fungi grow? Keep reading to learn more.

What is Orange Peel Fungus?

Orange peel fungus (Aleuria aurantia), or orange fairy cup fungus, is a striking fungi that can be found growing throughout North America, especially during the summer and fall. This fungus, like other members of the cup fungi family, has a cup-like body with folds and is a brilliant orange color, which some may mistake for a discarded orange peel. Spores are big and have spiny projections. This small fungus reaches heights of only about 4 inches (10 cm.) and has a white, felt-looking underside.

Orange peel fungus is a vital tertiary decomposer that depends on primary and secondary decomposers to do their work decomposing organic material before it breaks down complex molecules. Once the molecules are broken down, the fungi absorbs some of them for their own nutrition. The remaining carbon, nitrogen, and hydrogen are returned to enrich the soil.

Where Do Orange Cup Fungi Grow?

Orange cup fungi are stem-less and lay directly on the ground. Groups of these cups are often found together. This fungus grows in open areas along woodland trails, dead trees, and roadways in clusters. It often fruits in places where the soil has become compacted.

Contrary to what some cup fungi info may state, orange peel fungus is not poisonous and is, in fact, an edible mushroom, although it really has no taste. It does not secrete any toxins, but it does share a close resemblance to some species of Otidea fungi that do produce harmful toxins. For this reason it is often recommended that you not try to ingest it without proper knowledge and identification from a professional.

Since this fungus does not cause harm, should you come across it (even in the garden), simply leave it alone to allow this little decomposer to do its work enriching the soil.