Irish Moss
By: Becca Badgett, Co-author of How to Grow an EMERGENCY Garden
Printer Friendly Version 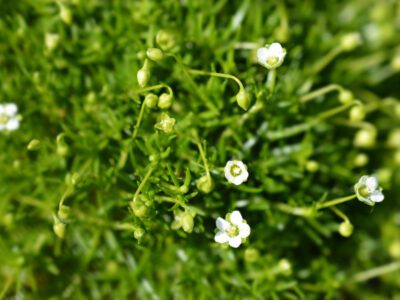 Irish moss plants are versatile little plants that can add a touch of elegance to your landscape. Growing Irish moss fills a range of garden needs. It is simple to learn how to grow Irish moss. You’ll find growing Irish moss can put the finishing touch on many areas of the garden and beyond. Keep reading to learn more about the care of Irish moss in your garden.

A member of the Caryophyllaceae family, Irish moss (Sagina subulata), which is not a moss at all, is also called Corsican pearlwort or Scot’s moss. Irish moss plants perform in a manner similar to moss, however. They do need some light to maintain the most amazing of emerald green colors found in its foliage. This herbaceous perennial (evergreen in warmer zones) turns green as temperatures warm. Charming little white blooms appear sporadically throughout the growing season. For a similar plant with a more yellow tint, try Scotch moss, Sagina subulata Aurea.

How to Grow Irish Moss

Soil should be fertile and have good drainage. Irish moss plants need regular watering, but should not have soggy roots.

Care for Irish moss is simple and includes cutting out browning patches in older mats. Growing Irish moss reaches only 1 to 2 inches (2.5-5 cm.) in height and when used as a lawn replacement, does not need mowing. If you don’t wish for such a drastic makeover, consider the possibilities of growing Irish moss as a ground cover.

Use the grass-like mats to spread around pavers or to edge a rock garden. Growing Irish moss is also attractive in containers. Uses of Irish moss are limited only by your imagination.