Container Grown Aucuba Shrubs: Can You Grow Japanese Laurel In A Pot 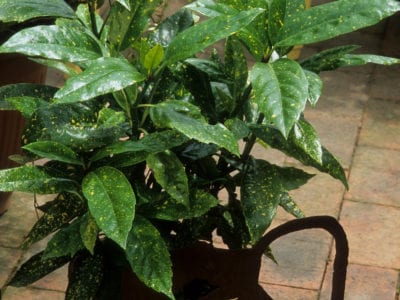 Can you grow Japanese laurel in a pot? Japanese laurel (Aucuba japonica) is a striking evergreen shrub appreciated for its showy, lustrous foliage. This adaptable plant is about as low-maintenance as they come, and growing Japanese aucuba in containers is no problem. Read on to learn more about container grown aucuba shrubs.

If you’re interested in growing Japanese aucuba in containers, then you’ll have to become familiar with the plant and its needs. Japanese laurel is a relatively slow-growing plant that eventually reaches heights of 6 to 10 feet (2-3 m.), although it can grow as tall as 15 feet (4.5 m.) when conditions are just right. If you’re concerned about the size, consider a dwarf plant, which generally tops out at about 3 feet (1 m.).

Plant Japanese laurel in a sturdy container with at least one drainage hole, as the plant will rot without adequate drainage. A piece of mesh laid over the hole will prevent it from becoming clogged with potting soil.

Plant the shrub in a soil-based potting mix, which is heavy enough to anchor the roots and helps stabilize the container during windstorms. However, avoid regular garden soil which becomes compacted and doesn’t provide proper drainage in a container.

The foliage of container grown aucuba shrubs remains shiny and dark green year round – as long as the plant is located in shade or filtered sunlight. Too much light, especially intense afternoon sunlight, can fade the color or even scorch the leaves. If you choose to grow potted Japanese laurel plants indoors, be sure to place the plant in a cool, dimly lit environment.

Water as needed to keep the soil slightly moist but never soggy, as Japanese laurel is prone to root rot. Cut back on water during the winter months and allow the soil to dry between watering.

Feed container grown aucuba shrubs once every month from spring through summer using a general-purpose, water-soluble fertilizer. Withhold fertilizer during the fall and winter months.

Potted Japanese laurel plants generally need no pruning; however, you can provide a light pruning to tidy up the plant and remove damaged or unsightly growth before new growth appears in late winter or early spring.

Repot container grown aucuba shrubs as needed to allow for plant growth – usually every other year. Repot to a container no more than one size larger.

Printer Friendly Version
Read more about Aucuba
<Previous
Did you find this helpful? Share it with your friends!
FacebookTweetPinEmail
Related Articles
Newest Articles
You might also like…
Additional Help & Information