Aucuba Pruning – How And When To Prune Aucuba Shrubs 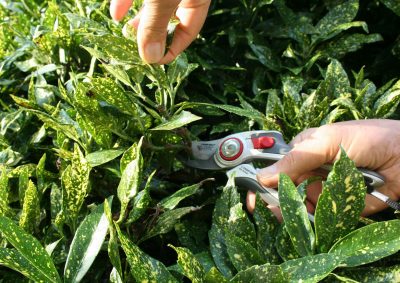 One of the most attractive home landscape plants is the Aucuba japonica. This slow growing foliage plant assumes a shrub-like habit with glossy pointed leaves and graceful arching stems. The blood red berries will persist on the female plant throughout winter and proper knowledge of how to prune an aucuba can assist in consistent fruiting.

Aucuba is not native to North America but does perform well in USDA plant hardiness zones 7 through 9. This ornamental shrub can be used singly as a focal point for the landscape, planted in groups as a hedge, or used in containers when young. Japanese aucuba plants are also sometimes referred to as Japanese laurel because of the similar shiny, waxy leaves.

There are many surprising cultivars available, which delight with a host of variances in pigment and texture. Some of the more common ones include:

The shrub grows 3 to 8 feet (1-2 m.) tall but takes years to achieve full maturity. This slow growth habit means aucuba pruning is seldom necessary. However, you should pay attention to when to prune aucuba to keep the dense form and use the cuttings to propagate new plants to enliven the landscape. Dip the cut ends into rooting hormone and push them into a soilless medium, such as peat moss. Keep the plant in a warm, dimly lit area with light moisture. Transplant the cutting as soon as it has rooted.

Aucuba japonica will flourish in organically rich soils where dappled lighting is offered. The Japanese aucuba plant prefers a partially shaded location where soils are slightly acidic and moist, but well-drained.

When to Prune Aucuba

Due to the slow growth rate, Aucuba japonica rarely requires trimming. Although the plant needs little maintenance, it does respond well to pruning to maintain size and a compact form.

The plant is a broadleaf evergreen, which should be pruned in early spring for best results. Light branch tipping or removal of dead wood can be done at any point in the year. A complete overhaul of a neglected Japanese aucuba plant is done in very early spring before new growth begins.

Refrain from fertilizing the plant prior to pruning to reduce the formation of young growth, which would only be cut off during the trimming process.

How to Prune an Aucuba

Aucuba pruning on young plants may only require a thumb and forefinger. Pinching off tip growth will help promote bushiness.

Use sharp, clean pruners for any maintenance project to ensure straight cuts and reduce the chance of disease introduction. Hand pruners are useful for removing errant growth and trimming back the stems to reduce the height of the shrub. Remove the growth to the next growing point for best results. Hedge trimmers are not recommended as they cut into the gorgeous leaves and reduce the ornamental value of the plant.

Printer Friendly Version
Read more about Aucuba
Next>
Did you find this helpful? Share it with your friends!
FacebookTweetPinEmail
Related Articles
Newest Articles
You might also like…
Additional Help & Information