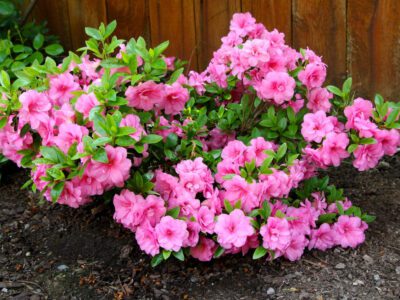 Blackened branches, covered by a sticky soot and white, cottony fluffs in the crotches of the lower branches are all symptoms of one of the most dreaded of azalea diseases. Black branches are the result of mold growing on the honeydew excreted by this azalea pest.

Azalea bark scale looks like, and is often mistaken for, mealybugs. The female is covered with waxy threads that harden into a protective scale as her egg sac forms. The azalea bark scale is tiny, but her effect, as seen on your azaleas turning black, is terrible.

As this azalea pest feeds, she secretes a honeydew on the azalea. Blackened branches, made so by honeydew and mold, eventually sicken and die, as does the female when her egg sac is full.

Eggs are laid in late April and a new batch of this azalea pest hatches in about three weeks. This is the time when treatment is most effective. Mature azalea bark scale wear shields. The nymphs haven’t had time to develop them. The time to attack your azalea blackened branches is while the azalea bark scale are nymphs.

To fight the azalea diseases black branches, the most effective weapons in your arsenal are horticultural oil or dormant oil and insecticidal soap. Cut away any of your azalea blackened branches that are dead or severely damaged and wipe away as much of the soot as you can with gloved hands. Spray the plant thoroughly, including the underside of the leaves. Continue spraying regularly through September and begin again in early spring.

With the proper strategy, you can win this battle against the most aggressive of azalea diseases. Blackened branches be gone! You’re at war with a tiny insect known as the azalea bark scale. Good luck and good hunting!