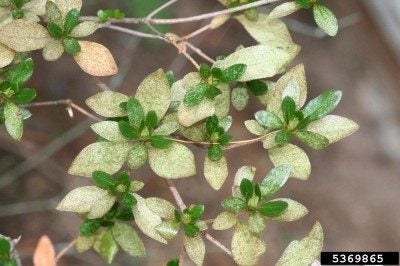 Azaleas are a popular landscaping plant due to their ease of care and their beauty, but for all their ease, they are not without a few problems. One of those is the azalea lace bug. These azalea insects can cause significant damage to a plant if not controlled. Lace bug damage to azaleas tends to be cosmetic, but they can ruin the look of a carefully tended azalea very quickly.

Lace bug damage to azaleas normally occurs on the leaves and will look like silvery, white, or yellow spots. This is caused by these azalea insects, literally sucking small sections of the leaf dry and killing that section of the leaf. As these azalea leaf pests move on across the leaf, more and more spots will appear.

You may even find the azalea lace bug or nymph on the leaves. The adult azalea lace bug can be identified by their “lace” like wings while the nymphs will merely look like tiny spots.

The azalea lace bug prefers evergreen azaleas but can also attack the deciduous varieties as well.

How to Get Rid of Azalea Lace Bug

These azalea insect problems are best avoided in the first place. The azalea lace bug tends to attack plants that are already weakened due to poor fertilizing or watering, so make sure to take proper care of your plants.

If your azalea shrub is already infested with these azalea leaf pests, you can try one of two methods for getting rid of them. The first is chemical controls and the other is organic control.

Chemical control involves using insecticidal soaps (some of which are organic). Most off the shelf insecticides will effectively kill azalea lace bugs.

For organic control of these azalea insects, you can try several methods. The first method to try is to spray the plant down with a sprayer on the hose. This can knock the pests of the plant and disorient them enough to prevent re-infestation.

You can also try spraying the plants with neem oil or white oil.

Lace bug damage to azaleas does not have to be devastating. With a little know how, these azalea insect problems can be dealt with and eliminated. Azalea lace bugs do not have to reduce the beauty of your plants.