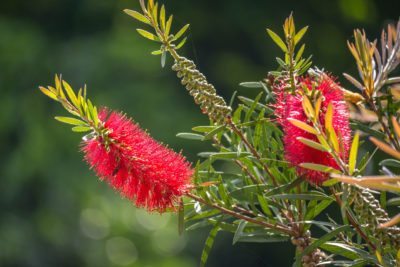 Few plants fit their common names better than bottlebrush shrubs. The spikes of flowers, so attractive to hummingbirds and butterflies, look exactly like the brushes you might use to clean a baby’s bottle or a narrow vase. These eye-catching plants are generally vital, healthy shrubs, but occasionally bottlebrush diseases strike. If you have sick bottlebrush plants, read on for helpful information about bottlebrush disease treatment.

Gardeners love bottlebrush plants (Callisteman spp.) for their brilliant, blood-red flowers, evergreen foliage, and easy-care ways. These shrubs are so vital that they can become invasive if left to their own devices. But that doesn’t mean that you won’t have to deal with a few diseases that attack these bushes. If you know the signs of different bottlebrush diseases, you’ll be able to jump right into a bottlebrush disease treatment.

The most common bottlebrush diseases include both easy-to-remedy problems, like twig gall or mildew, and serious issues like root rot and verticillium wilt. Many of the issues are caused by excessive moisture in the soil or on the foliage of the plants.

For example, wet soil is the direct cause of twig gall, a fungal disease. If you see many new twigs growing from the tree and branches that bloat, the shrub may have twig gall, one of the most common bottlebrush diseases. Cut off the unhealthy growth and dispose of it, then correct the overly wet soil.

Both root rot and verticillium wilt are serious bottlebrush diseases that are difficult or impossible to treat. Both are caused by fungus.

Root rot results from too much water in the soil. Bottlebrushes need well-drained soil, not wet soil. When the soil is too moist, the root rot fungus can attack the shrub’s roots as well as the plant’s neighbors. You’ll see the branches dying back, leaves yellowing and falling, and the trunk turning strange colors. Bottlebrush disease treatment here is applying fungicides, but it’s much easier to prevent this disease than to cure it.

Verticillium wilt is another one of the diseases of bottlebrush that causes yellowing leaves and branch dieback. It is not likely to kill bottlebrush plants, but it is hard to rid the soil of the fungus. Your best bet is to treat the area with fungicides and move the tree to another location.

Printer Friendly Version
Read more about Bottlebrush
<Previous
Did you find this helpful? Share it with your friends!
FacebookTweetPinEmail
Related Articles
Newest Articles
You might also like…
Additional Help & Information