Why Are There Yellow Or Brown Leaves On Boxwood Shrubs 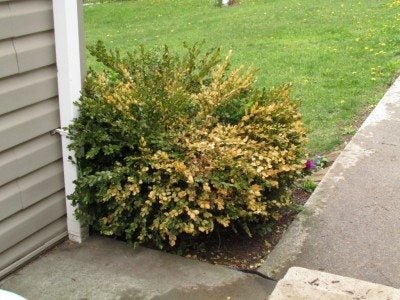 Image by Gardening Know How via, carol

They make the perfect thick, luxurious hedge, but boxwoods aren’t all they’re cracked up to be. They’re plagued with a number of problems that can result in brown or yellowing boxwood shrubs. These boxwood problems range in trouble from very easy to cure to extremely damaging. Although boxwoods can be beautiful barriers when they’re healthy, they’ll need your help to deal with whatever is ailing them.

Here are some common causes of a boxwood turning yellow or brown:

Winter Damage. If you live in a place that experiences freezing temperatures in the winter, your boxwood may have been damaged by excessive snow, ice, and cold– or even winter burn. The cold-nipped tissues can take many months to become obvious, so if the yellow leaves are appearing in the spring, try not to panic unless they continue to spread. Feed and water your bushes like normal to help them recover.

Root Rot. Sometimes the root systems of boxwood shrubs get infected with fungal pathogens like Phytophthora. When root rot becomes serious, it’ll manifest as yellowing leaves that curl inward and turn up, and the plant will grow poorly. Really serious root rot may move into the crown, discoloring the wood near the plant’s base.

Treating root rot is all about increasing the drainage around the plant’s roots, so if it’s potted, make sure to reduce watering frequency. A landscape boxwood may have to be dug and the soil around it amended to give it a fighting chance. Unfortunately, there’s no chemical intervention available for root rot.

Nematodes. The tiny roundworms known as nematodes are no strangers to boxwoods. These microscopic pests feed from plant roots, causing symptoms of general decline. Plants will yellow and wilt or even die back if root damage is extensive. You can prolong the life of these infected plants by providing plenty of water and feeding them regularly, but they will eventually succumb to nematodes. When they do, consider replacing them with nematode-resistant American boxwoods, yaupon holly or Buford holly.

Macrophoma Leaf Spot. This common fungus looks alarming when a gardener first notices it, with the yellow or tan-color leaves sporting black fungal fruiting bodies. Fortunately, even though it looks horrible, it’s nothing to worry about. If your plant is completely covered in those black fruiting bodies, consider treating it with neem oil; otherwise, the disease will clear on its own.

Volutella Blight. When large portions of your boxwood’s new growth is turning from red to yellow at the beginning of the growing season, with salmon fruiting bodies following, you’ve got a bigger problem on your hands– closer inspection may reveal that your plants have loose bark and girdling on affected branches. Volutella blight can be difficult to control, but remember that the goal is to decrease favorable conditions for fungal growth.

Trimming the boxwood by up to 1/3 will help reduce the interior humidity and remove the infected branches, which are sources of fungal spores. Make sure to remove as much of the dead growth as possible before you begin a spray program. In the early spring, before new growth has started, spray your boxwood with a copper fungicide and continue to spray according to package directions until the new growth has hardened. You may need to spray again in the late summer or fall if your boxwood adds extra growth during particularly rainy periods.