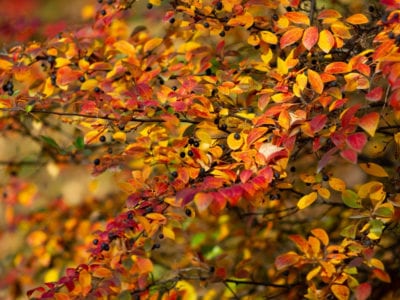 Cotoneasters are versatile, low maintenance, deciduous shrubs for the landscape. Whether you’re looking for a low sprawling variety or a taller type for a dense hedge, there is a cotoneaster that will meet your needs. In this article, we will discuss hedge cotoneaster plants.

What is Hedge Cotoneaster?

Hardy in zones 3 through 6, hedge cotoneaster (Cotoneaster lucidus) is native to areas of Asia, specifically in the Altai Mountain regions. Hedge cotoneaster is a more rounded upright plant than the very common wide, sprawling cotoneaster that most of us are familiar with. Due to its dense, upright habit and its tolerance of shearing, hedge cotoneaster is oftentimes used for hedging (hence the name), privacy screens, or shelter belts.

Hedge cotoneaster has the familiar ovate, glossy, dark green foliage of other cotoneaster plants. In spring to early summer, they bear small clusters of pink flowers. These blooms attract bees and butterflies, making them excellent for use in pollinator gardens. After flowering, the plants produce the classic pom-shaped red, purple to black berries. Birds love these berries, so cotoneaster plants are often found in wildlife or bird gardens too.

The plants are wind and salt tolerant, which adds to the benefits of using them as a hedge or border. Plants can grow 6 to 10 feet tall (2-3 m.) and 5 to 8 feet wide (1.5-2 m.). When left untrimmed, they will have a natural rounded or oval habit.

Printer Friendly Version
Read more about Cotoneaster
<PreviousNext>
Did you find this helpful? Share it with your friends!
FacebookTweetPinEmail
Related Articles
Newest Articles
You might also like…
Additional Help & Information