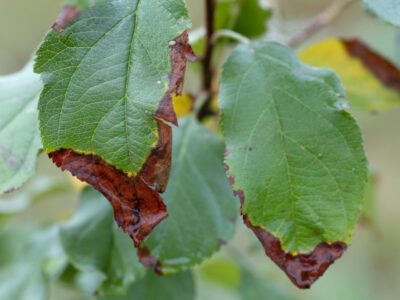 While there are numerous diseases affecting plants, the plant disease fire blight, which is caused by bacteria (Erwinia amylovora), affects trees and shrubs in orchards, nurseries, and landscape plantings, therefore, no one is safe from its path.

The plant disease fire blight is oftentimes influenced by seasonal weather and generally attacks the plant’s blossoms, gradually moving to the twigs and then the branches. Fire blight gets its name from the burnt appearance of affected blossoms and twigs.

The symptoms of fire blight can appear as soon as trees and shrubs begin their active growth. The first sign of fire blight is a light tan to reddish, watery ooze coming from the infected branch, twig, or trunk cankers. This ooze begins to turn darker after exposure to air, leaving dark streaks on the branches or trunks.

Fire blight infections often move into twigs and branches from infected blossoms. The flowers turn brown and wilt and twigs shrivel and blacken, often curling at the ends. In more advanced cases of fire blight infection, cankers begin to form on branches. These discolored oozing patches contain masses of the fire blight bacteria and heavy infections can be fatal.

Fire blight bacteria is easily spread through various means such as rain or water splashing, insects and birds, other infected plants, and unclean gardening tools. The maximum risk of exposure to this bacterium is late spring or early summer as it emerges from dormancy. Unfortunately, there is no cure for fire blight, therefore, the best fire blight remedies are regular pruning and removal of any infected stems or branches. It may also help to avoid overhead irrigation, as water splashing is one of the most common ways to spread the infection.

Special attention should also be given to garden tools, especially those that have been exposed to the bacteria. Tools should be sterilized in an alcohol solution containing three parts denatured alcohol to one part water. Ethanol and denatured alcohol are very different. While ethanol alcohol is not poisonous and quite safe to use, denatured alcohol is a toxic solvent oftentimes used as Shellac thinner. Diluted household bleach (one part bleach to nine parts water) can also be used. Always make sure to thoroughly dry tools to prevent corrosion. It sometimes helps to oil them down as well.

Always read and follow instructions carefully before using any chemicals to treat fire blight. Since chemicals aren’t always effective in fire blight control, organic control, such as extensive pruning, may be the only option for fire blight treatment.