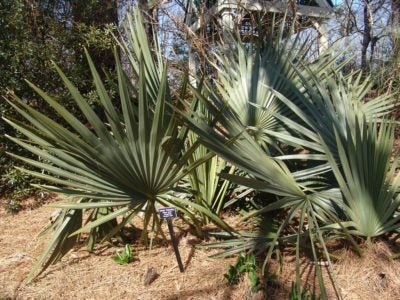 Dwarf palmetto plants are small palms that are native to the southern U.S. and that thrive in warm climates. They can act as understory palms for taller trees or as focal points in beds and gardens. These diminutive palms have the advantage of being attractive and easy to care for.

Sabal minor, or the dwarf palmetto, is the smaller relative of the Sabal palmetto, popular in the South. For a warm-weather plant, the dwarf palm is pretty hardy. It can be grown in zones 7 through 11, and it will survive the occasional winter cold snap or snow with minimal or no damage as long as it has had time to get established.

Smaller than the Sabal palmetto, when growing a dwarf palm, expect it to reach a height anywhere between two and seven feet (0.5 to 2 m.) and a spread between three and five feet (1 to 1.5 m.). The fronds are large and fan-like and, although this palm looks similar to the cabbage palm, unlike that plant its trunk rarely emerges from the ground.

Dwarf palm produces a type of fruit called a drupe, which feeds robins, mockingbirds, woodpeckers, and other wildlife. It also produces small, white flowers in the spring.

How to Grow Dwarf Palmetto Trees

Dwarf palmetto care is easy, as this plant will tolerate a variety of conditions. It can grow in nearly any type of soil, for example, from sand to clay. It will tolerate standing water for short periods of time without rotting. In its natural habitats, the dwarf palm will grow in marshy areas, on drier mountain slopes, and everywhere in between.

A dwarf palm does prefer soil that is rich in certain minerals, like magnesium and manganese. A good palm fertilizer is enough to correct any soil deficiencies, though. Give the palm a spot in the garden that gets full sun or partial shade.

Water your palm regularly for its first two years in the ground to allow it to get established. Pruning of browning palm fronds is important to keep the plant healthy.

Growing a dwarf palm is fairly easy, and it provides a nice anchor in the garden, especially in small spaces. Because it is hardier than other palms, you can enjoy its tropical feel even in gardens that get some colder winter weather.