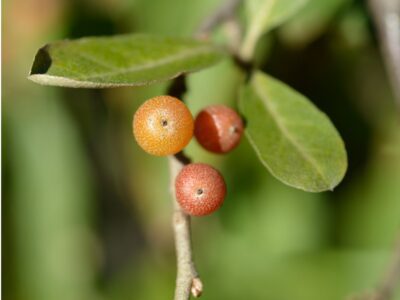 Sometimes invited guests overstay their welcome and take up too much space. This was the case with autumn olive, which was brought into the United States in 1830 and widely planted as an ornamental. It is still here today and considered an invasive weed. A variety of woody shrubs either look like the autumn olive or share its growth patterns.

The autumn olive (Elaeagnus umbellata) is a woody shrub that usually doesn’t exceed 20 feet (6 m.) tall. It is deciduous, dropping its leaves in winter. Those leaves are attractive, green above but, on the underside, covered densely with silver red scales. They are oval or long and thin, generally having smooth margins and always alternate rather than growing directly across from each other.

The autumn olive is currently found in the eastern part of the country, from Maine to Virginia and west to Wisconsin. It grows in disturbed areas as well as grasslands, fields, and open woodlands. Since it tolerates drought and fixes nitrogen in its roots, it can grow almost anywhere in this range.

How to Identify the Autumn Olive

The autumn olive shrub flowers in early summer, producing fragrant flowers. Each one has four cream-colored petals, fused at the base.

The fruits are drupes that appear in late summer through early fall. Each fruit is small but there are many of them and much appreciated by wildlife. The flower buds and fruit are also sprinkled with silvery scales. These scales are essential parts of autumn olive identification.

Another important identifying element of the shrub can only be seen if you pull it out of the ground. This is the fact that it enables nitrogen fixation.

The Russian olive (Elaeagnus angustifolia) and the autumn olive have so much in common that it may not be worth it to distinguish the two. They are closely related members of the Elagagnus genus and resemble each other closely.

Like the autumn olive, the Russian olive was brought in as an ornamental and to feed wildlife, but quickly started invading open fields nearby planting areas. However, it tends to grow in the western half of the country.

In addition to its twin Elaeagnus Russian olive, there are several other shrubs that look like autumn olive enough that one might call them autumn olive lookalikes. These include silver buffalo berry (Shepherdia argentea),another import that isn’t native to this country and its relative that is native to North America, russet buffalo-berry (Shepherdia canadensis). Both have small scales on the undersides of their leaves. These shrubs are less tree-like than the taller autumn olive shrubs.

For a good alternative to autumn olive with similar growth patterns, try ​American hazelnut (Corylus americana), tolerant of any sun exposure and also most types of soil. It doesn’t produce drupes, but instead those yummy hazelnuts, equally beloved by wildlife of all kinds. This shrub forms clonal patches as well that hold soils in place in potential erosion areas. It provides cover for wildlife too.