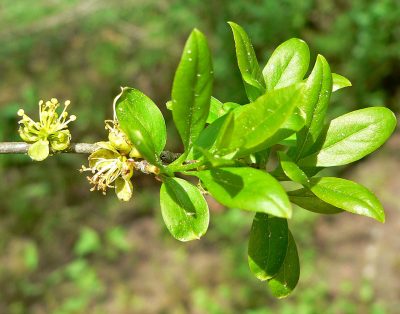 Few bushes have more common names than the elbow bush plant (Forestiera pubescens), a shrub native to Texas. It’s called elbow bush because the twigs grow at 90-degree angles from the branches. Its flowers resemble forsythia, which explains its nickname Texas forsythia. You may also know it as spring herald, tanglewood, or cruzilla. So, what is an elbow bush plant? How hard is elbow bush care? Read on for elbow bush information, including tips for growing an elbow bush in your backyard.

Texas elbow bush is a native plant that’s found in prairies, along streams, and in brush. It grows to 15 feet (5 m.) tall with a 5 inch (13 cm.) diameter and can be described as a large shrub or a small tree. Its branches droop and layer, forming a thicket.

Elbow bush information tells you that some Texas elbow bush plants bear female flowers, and others male. Female flowers are yellow with one two-lobed stigma while male blossoms form a cluster of two to five green stamens surrounded by hairy bracts. These are often the first flowers to appear in spring. The blossoms appear in the axels of the former year’s leaves.

Flowers of the elbow bush plants attract both bees and butterflies. These blossoms serve as important food sources for insects ending their winter dormancy. In time, the female flowers develop fruits, small blue-black drupes. Every three to five years, an elbow bush plant will have a bumper crop of the drupes.

Birds and small mammals rely on the fruits for sustenance from June through October. The foliage also assists wildlife by providing deer browse.

Growing an elbow bush is not difficult if you live in USDA plant hardiness zone 7 or above. These rapid-growing natives accept many growing conditions. Elbow bush plants thrive in sun or partial shade and tolerate different types of soil.

Once you start growing an elbow bush, you’ll find that elbow bush care is easy. Like most native plants, Texas elbow bush does not require fertilizer to thrive.

This shrub tolerates heat and drought quite well. You’ll need to irrigate until the plant is established. After that, elbow bush care does not include frequent watering. You can prune the bush back if you want denser foliage.