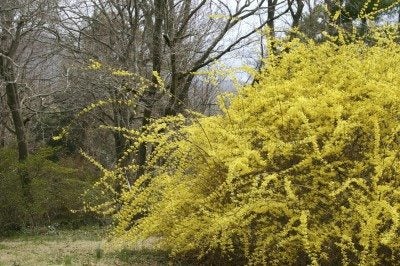 A true harbinger of spring, forsythia blooms in late winter or spring before the leaves unfurl. Weeping forsythia (Forsythia suspensa) is slightly different from its commonly found cousin, the border forsythia, in that it has trailing branches. Let’s learn how to care for this large, graceful shrub.

What Is a Weeping Forsythia?

Weeping forsythia is native to China but has become naturalized in many parts of North America. The plant spreads by taking root anywhere a branch touches the ground. Although it spreads easily, it isn’t likely to escape cultivation, so it isn’t on any of the U.S. Department of Agriculture’s invasive plant lists. One reason that it fails to thrive in the wild is that many animals feed on the plant, including deer.

Although a blooming forsythia is striking, the foliage and stems aren’t very attractive. Once the flowers fade, you’ll have a rather plain shrub for the rest of the year. You might want to plant it where you can view the graceful shape of the shrub from a distance, or near the back of a large shrub grouping. If you plant it at the top of a retaining wall, the branches will cascade down and cover the wall.

It’s hard to imagine a shrub that is easier to care for than weeping forsythia. It needs little or no pruning, tolerates a wide range of conditions, and thrives on neglect.

Weeping forsythia shrubs flower best in full sun, but they also grow in partial shade. The shrubs grow well in almost any soil, as long as it isn’t too rich. It tolerates dry spells but needs supplemental watering during extended periods of drought. Weeping forsythia plants are hardy in USDA plant hardiness zones 5 through 8.

The care of weeping forsythias is a snap because they seldom need watering or fertilizer. If the soil is poor, apply a small amount of general-purpose fertilizer over the root zone and water it in. When the soil dries, water slowly and deeply. Applying the water slowly allows the soil to absorb the moisture before it runs off.

Weeping forsythia pruning is a snap. When you need to remove a branch, cut it back all the way to the ground. Cutting the shrub back by shortening the branches destroys its natural shape, and it can take three years or more to recover its natural beauty. One exception is that you may want to cut back the ends of stems that threaten to touch the ground to keep them from rooting.

Printer Friendly Version
Read more about Forsythia
<PreviousNext>
Did you find this helpful? Share it with your friends!
FacebookTweetPinEmail
Related Articles
Newest Articles
You might also like…
Additional Help & Information