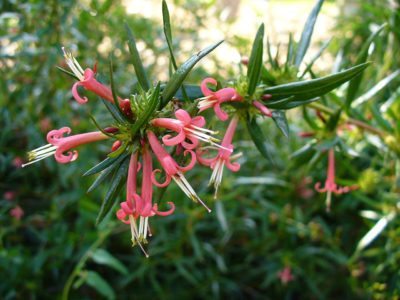 Years ago, low mounds of golden, creeping foliage anchored in sandy dunes all along the southern coasts of Florida. This plant, Ernodea littoralis, became known as golden creeper. As coastal regions of Florida became developed by man, many of these native plants were removed and replaced with showier, tropical plants that enhanced the resort-like atmosphere. Golden creeper is now listed as an endangered species in many areas of Florida. Continue reading to learn more about golden creeper plants.

Also known as beach creeper and coughbush, golden creeper is a low-growing, deciduous shrub. It is native to Florida, the Bahamas, the Caribbean, Belize, and Honduras, where it is found growing wildly in sandy coastal areas. However, it has lost many of its native habitats in Florida. Golden creeper is hardy in zones 10-12 and grows in poor soils where little else can grow.

Golden creeper is a sprawling, vine-like shrub that grows 1-3 feet (30.5-91.5 cm.) tall and 3-6 feet (91.5-182 cm.) wide. The foliage is deep green to golden yellow depending on exposure. The plants bear small inconspicuous white, pink, orange, or red flowers sporadically throughout the year. When flowers fade, they produce small yellow to orange berries.

The flowers and fruit provide food for many native butterflies, birds, and other wildlife. Many counties in southern Florida are now re-growing golden creeper plants in coastal areas in an effort to reclaim the natural Florida landscape and provide native food for its native creatures.

How to Grow Golden Creeper in the Landscape

Golden creeper plants spread by suckering. Their long arching stems will also take root where they touch the soil. Golden creeper will grow in poor soils, but they prefer sandy, acidic to slightly alkaline soils.

Golden creeper plants need full sun. They are tolerant of salt spray, but cannot tolerate being flooded by salt water for long periods. They also make an excellent erosion-controlling plant.

They are used in hot, dry areas where little else will grow, such as road medians and parking lot beds. In the landscape, they can be used as low-growing groundcovers for tough spots, such as along driveways. They can also be planted around palm trees for a showy contrast or used as foundation plantings.

Golden creeper in gardens should be pruned once or twice a year to control growth and prevent the plants from becoming woody and leggy. Pruning should be done from spring to fall, but not during the winter months.