Information On How To Fix Yellow Leaves On Holly Trees 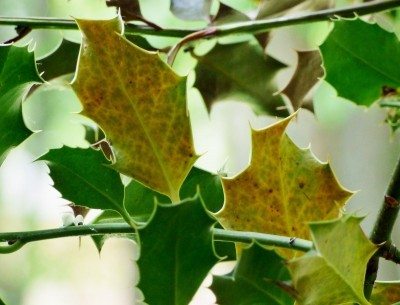 Yellow leaves on holly trees is a fairly common problem for gardeners. On a holly, yellow leaves typically indicates an iron deficiency, also known as iron chlorosis. When a holly plant does not get enough iron, the plant cannot produce chlorophyll and you get yellow leaves on your holly bush. A holly turning yellow can be fixed with a few simple changes.

What Causes Iron Chlorosis and Yellow Leaves on Holly Trees?

Iron deficiency and yellow holly leaves can be caused by many things. The most common reasons for this is either overwatering or poor drainage.

Overwatering causes yellow leaves on a holly bush by either leaching away the iron in the soil or by suffocating the roots so that they are not able to take in the iron in the soil. Similarly, poor drainage also causes iron chlorosis in hollies, because the excess standing water also suffocates the roots.

Another cause of yellow leaves on holly trees is soil that has a pH that is too high. Hollies like soil that has a low pH, in other words, acidic soil. If the pH is too high, the holly plant cannot process the iron and then you get yellow holly leaves.

The last reason can be simply a lack of iron in the soil. This is rare, but can occur.

How to Fix a Holly with Yellow Leaves

Yellow leaves on holly bushes is pretty easy to fix. First, make sure that the plant is getting the appropriate amount of water. The holly bush should be getting about 2 inches (5 cm.) of water a week and no more than this. Do not water additionally if the holly plant is getting enough water from rainfall.

If the yellow leaves on your holly trees are caused by poor drainage, work to correct the soil. Adding organic material to the soil around the holly bush will help fix the drainage.

Second, have your soil tested with a soil test kit or at your local extension service. Find out if your yellow holly leaves are caused by too high a pH or by a lack of iron in the soil.

If the problem is too high a pH, you can make the soil more acidic. You can do this by using acidifying fertilizers or, you can find more ways to lower the pH in this article.

If your soil is lacking iron, adding a fertilizer that contains trace amounts of iron will correct the problem.