How To Transplant Holly Bushes 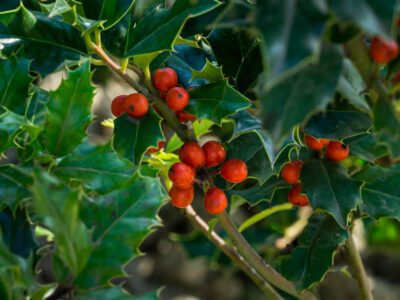 When is the Best Time to Transplant a Holly?

The best time to transplant a holly bush is in early spring. Transplanting in early spring helps to keep the plant from losing its leaves due to the shock of being moved. This is because the extra rain in the spring and cool temperatures helps the plant retain moisture and this prevents it from shedding leaves as a way to retain moisture.

If absolutely necessary, you can transplant holly bushes in the early fall. The chances of the leaves dropping will be increased, but the holly bushes will most likely survive.

If you do end up with a naked holly after transplanting a holly shrub, don’t panic. The chances are very good that the holly will regrow the leaves and be just fine.

How to Transplant Holly Bushes

Before you remove the holly bush from the ground, you will want to make sure that the new site for the holly shrub is prepared and ready. The less time the holly spends out of the ground, the more success it will have in not dying from the shock of being moved.

At the new site, dig a hole that will be larger than the root ball of the transplanted holly. Dig the hole deep enough so that the holly bush’s root ball can sit comfortably in the hole and that the holly will sit at the same level in the ground that it did at the previous location.

Once the hole is dug, dig up the holly bush. You want to make sure that you dig up as much of the root ball as possible. Dig at least 6 inches (15 cm.) from the perimeter of where the leaves end and down about a foot (31 cm.) or so. Holly shrubs have rather shallow root systems, so you do not have to dig deeply to reach the bottom of the root ball.

Once the holly shrub is dug out, quickly move the shrub to its new location. Place the holly into its new spot and spread the roots out in the hole. Then backfill the hole with soil. Step on the backfilled soil all the way around the holly bush to makes sure that there are no air pockets in the backfilled hole.

Water the transplanted holly thoroughly. Continue to water it daily for a week and after that water it deeply twice a week for one month.