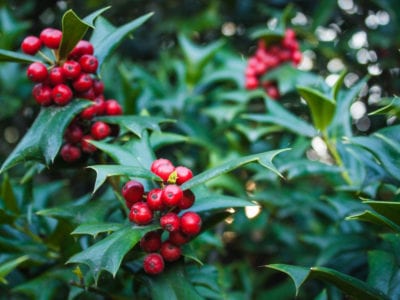 Growing holly bushes in your yard can add structure and a splash of color in the winter and a lush, green backdrop for other flowers in the summer. Because they are such popular plants, people often have questions about the care of holly bushes.

The best time for planting holly bushes is either in the spring or fall. The relatively low temperatures combined with higher rainfall will make settling into the new location much less stressful for the holly bush.

The best location for planting holly bushes is in well-drained but not dry, slightly acidic soil in full sun. That being said, most hollies are very tolerant of less than ideal locations and will grow well in part shade or dry or swampy soil.

If you are growing a holly bush for its bright berries, you need to keep in mind that most holly varieties have male and female plants, and that only the female holly shrub produces berries. This means that in the location where you’d like to plant a holly bush with berries, you will need to plant a female variety, and you’ll also need to make sure that a male variety is planted nearby. You can, instead, try to find holly varieties that don’t need a male plant in order to produce holly berries.

The initial care of holly bushes after they are planted is much like other trees and shrubs. Make sure that your newly planted holly bush is watered daily for the first week, twice a week for a month after that and, if planting in spring, once a week for the remainder of summer.

The care of holly bushes after they are established is easy. Fertilize your holly bushes once a year with a balanced fertilizer. They do not need to be watered in normal conditions, but if your area is experiencing a drought, you should give your holly bushes at least 2 inches (5 cm.) of water per week.

When growing a holly bush, it also helps to mulch around the base of the holly shrub to help retain water in the summer and to even out the soil temperature in the winter.

Proper care for holly shrubs also calls for regular pruning. Pruning your holly bushes will ensure that they keep a nice compact form rather than becoming leggy and scraggly.

If you find that your holly shrubs are being damaged in the winter by snow and wind, you can wrap the holly shrubs in burlap to protect them from the weather.