Holly Fruiting Schedule – When Does Holly Bloom And Fruit 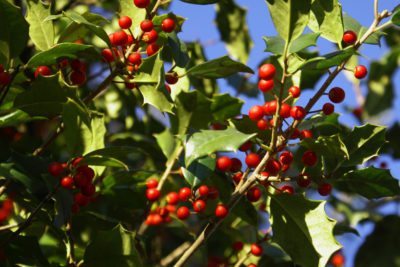 How happy the holly tree looks, and how strong,
Where he stands like a sentinel all the year long.
Neither dry summer heat nor cold winter hail,
Can make that gay warrior tremble or quail.
He has beamed all the year, but bright scarlet he’ll glow,
When the ground glitters white with the fresh fallen snow.

In her poem, The Holly, Edith L.M. King perfectly describes the traits we love in holly plants. Holly’s deep, evergreen foliage and bright red berries are sometimes the only sign of life in the winter landscape. Commonly associated with Christmas, everyone knows of holly’s winter appeal. However, you may wonder does holly bloom or what other interest does holly have in the garden? Continue reading to learn more about holly fruiting and flowering times.

The serrated evergreen foliage and red berries of holly plants have been used as Christmas decorations for centuries because they are one of the few plants that are available and looking alive in December. Female holly plant berries begin to ripen and turn red in autumn. The berries then persist throughout winter, but birds and squirrels do sometimes eat them. It’s important to note that raw holly berries are toxic to humans.

Only female holly plants produce berries, though, and they will only produce fruits if they have been cross pollinated by a nearby male plant. It is recommended that there be one male plant for every three female holly plants in the garden. The male and female plants do not have to be right next to each other to cross pollinate because bees usually pollinate the plants, but it is recommended that the male plants be within 50 feet (15 m.) of the females.

If you have only one holly plant and have wondered “when will my holly produce berries,” it probably will not fruit until you get it a plant to cross pollinate with.

When Does Holly Bloom and Fruit?

Holly plants bloom in spring to early summer, depending on climate. The flowers can be small, inconspicuous, short-lived, and easily missed. These flowers are generally white when open, but can have greenish, yellowish, or pinkish hues.

Male flowers form in tight clusters and have yellow stamens in their centers. Male holly flowers are loaded with pollen and attract many pollinators to the garden. Female holly plants can form singularly or in clusters, depending on variety. In the center of female holly flowers, there is a small, green, ball shaped fruit that, if pollinated, will become the red berries that holly plants are famous for.