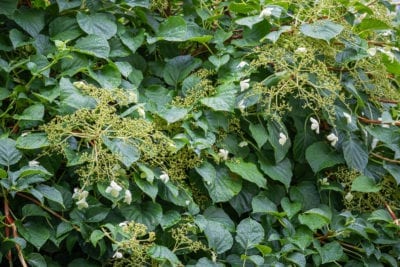 Hydrangeas are beautiful plants with big, bold leaves and clusters of fancy, long-lasting blooms. However, most are deciduous shrubs or vines that can look a bit bare and forlorn during the winter months.

The following list includes hydrangeas that don’t lose their leaves, and one that makes a great alternative plant:

Climbing evergreen hydrangea (Hydrangea integrifolia) – This climbing hydrangea is an elegant, rambling vine with glossy, lance-shaped leaves and red-tinged stems. Lacy white flowers, which are a little smaller than most hydrangeas, show up in spring. This hydrangea, native to the Philippines, is lovely scrambling over fences or ugly retaining walls, and particularly striking when it climbs up an evergreen tree, attaching itself by aerial roots. It is suitable for growing in zones 9 through 10.

Seemann’s hydrangea (Hydrangea seemanii) – Native to Mexico this a climbing, twining, self-clinging vine with leathery, dark green leaves and clusters of sweet-smelling, creamy tan or greenish white flowers that make an appearance in late spring and early summer. Feel free to let the vine twine up and around a Douglas fir or other evergreen; it’s beautiful and won’t harm the tree. Seeman’s hydrangea, also known as Mexican climbing hydrangea, is suitable for USDA zones 8 through 10.

Chinese quinine (Dichroa febrifuga) – This isn’t a true hydrangea, but it’s an extremely close cousin and a stand-in for hydrangeas that are evergreen. In fact, you may think it’s a regular hydrangea until it doesn’t drop its leaves when winter comes. The flowers, which arrive in early summer, tend to be bright blue to lavender in acidic soil and lilac to mauve in alkaline conditions. Native to the Himalayas, Chinese quinine is also known as blue evergreen. It is suitable for growing in USDA zones 8 to 10.