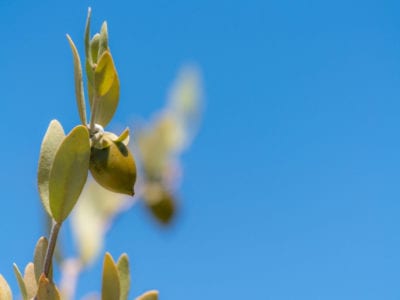 Not everyone has heard of the jojoba plant (Simmondsia chinesis), but that doesn’t mean it’s a Johnny-come-lately to North America. What is jojoba? It is a perennial woody shrub that grows wild in Arizona, southern California, and parts of Mexico. This drought-tolerant shrub can grow in regions with as little as 3 inches (8 cm.) of irrigation per year. Growing jojoba plants is easy because jojoba plant care is minimal. Read on for more jojoba plant facts.

Exactly What is Jojoba?

Jojoba is a shrub or small tree with multiple stems that grows in dry, arid sections of the country. It grows between 8 and 19 feet tall, and male and female flowers appear on different plants. The fruit is a green capsule which encloses up to three seeds.

Jojoba plant facts make it clear why this is a good plant for times of drought. The leaves stand vertically, so that only the tips are exposed to the hot sun. They have a waxy cuticle that cuts down on water loss and the tap roots descend deep into the earth in search of water.

The jojoba plant was used by Native Americans for many purposes. They used the oil from the jojoba seeds for their hair care as well as medicinal purposes, and the ground seeds served to make a hot beverage.

In addition, jojoba plant cultivation has increased as jojoba products are commercialized. For example, the seed oil is used extensively in cosmetics and skin lotions.

Jojoba plant care is not difficult. The plants establish readily if offered a hot, dry climate, well-drained soil, and a little irrigation.

Growing jojoba plants is easiest in sandy soil, and neither amendments nor fertilizer should be added. Plant jojoba in the hottest spot in the garden. Provide irrigation only until the plants are established.

Plants bear either female or male flowers. While the pollen from the male flowers is essential to fertilize the female flowers, it is the female plant that bears the oil-rich seeds. Jojoba is wind pollinated.