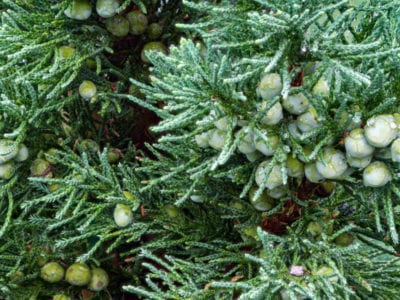 Found primarily in the United States east of the Rockies, eastern red cedars are members of the Cypress family. These medium sized evergreen trees provide outstanding shelter for many birds and mammals during the winter and make for excellent color in the landscape during otherwise drab months. Interested in growing eastern red cedars? The following article contains information about caring for an eastern red cedar tree and other eastern red cedar facts.

Eastern red cedars (Juniperus vinginiana) are also known as juniper, savin evergreen, cedar apple, and Virginia red cedar. The trees are shaped like a pyramid or column with grayish to reddish-brown bark. The foliage is blue-green to green and needlelike. Female and male cones are borne on separate trees.

Female trees have little blue balls adorning the branches – the fruit. Inside the fruit there are 1-4 seeds that are spread by birds. The inconspicuous flowers are small and spiky. Male trees have tiny tan colored pine cones, which are the pollen bearing organs of the tree. Pollen is released from these tiny organs at the end of the winter to pollinate the female structures. Red cedars then flower early in the spring.

Native Americans used red cedar for incense or to burn during purification rites. The Blackfeet made a berry tea of the red cedar to combat vomiting. They also boiled the leaves in water and mixed the resulting brew with turpentine which was then rubbed on the body to soothe rheumatism and arthritis. The Cheyenne steeped the leaves and drank the tea to calm coughs or throat problems. A tea was also used to hasten childbirth. Other Native Americans used the eastern red cedar for everything from asthma, colds, diarrhea, fevers, tonsillitis, and pneumonia. Topical concoctions were used to slow bleeding as well. Eastern red cedar information could also be found listed in the U.S. Pharmocopoeia from 1820-1894 for use as a diuretic.

Red cedars can often be found in cemeteries as ornamentals. The wood is used for furniture, paneling, fence posts, and novelties. Both the fruit and tender young branches contain oil that is used in medicines. As mentioned, many birds and small mammals rely on the cedar for shelter during the winter months. The tender branches are also eaten by larger hoofed mammals. Many birds, from juncos to waxwings to sparrows, feast on the red cedar berries.

Growing eastern red cedars saplings can often be obtained from a nursery or if they are common in your area, they might just pop up unbidden from seeds deposited by birds.

Red cedars can also be propagated via cuttings. Cuttings should be taken in late fall, winter or spring when the tree is dormant and the sap has slowed. Try to take the cutting in the early morning.

To grow a cedar from a cutting, you will need a 3 to 6 inch (7.5-15 cm.) piece of current year’s growth. Choose a branch that is flexible and light brown and cut it at a 45-degree angle. Pinch off any foliage from the bottom of the cutting and wrap it in wet paper towels place in a bucket of ice to keep them cold until you plant them. Plan to get them in the ground within an hour or two.

Fill a medium sized pot with a soilless potting mixture. Dip the cut portion of the cutting in rooting hormone, tap off any excess and put the cutting into the soilless mix. Pat the mix firmly down around the cutting. Place the pot into a clear plastic bag that is sealed with a twist tie. Store the cutting in a warm room with bright but indirect light. Mist the cuttings daily with a spray bottle and reseal the bags afterwards. In four weeks, test the cuttings by giving them a gentle tug. If they resist, rooting has taken place.

Transplant the cuttings into pots of regular soil after 3 months and take them outside to acclimate gradually. They can then be planted into the garden in the late fall.

Propagation of eastern red saplings can also be done with seeds, but it will likely take longer. If you aren’t in a hurry, gather fruit in the fall. Try to pick only ripe berries and pick plenty since germination rates tend to be iffy. The seeds can then be stored as berries or cleaned seeds.

To get to the seeds, soften the fruit with a drop of detergent in some water. The detergent will help make the seeds float to the top. Gather the floating seeds and allow them to dry on paper towels. Store the dried seeds in a sealed container in the refrigerator.

You can also lay the fruit out to dry and then shake the seeds out of the cones after a few days. Then clean the seeds of any dirt or debris by gently rubbing them; don’t use water or the seeds may begin to rot. Store them in the refrigerator or other dark area of between 20-40 degrees F. (-6-4 C.).

To take advantage of natural chilling, sow seeds in the fall. Otherwise, seeds may be sown in the spring or summer, after a period of stratification. Prior to planting, stratify seeds for a month. Layer seeds between layers of moistened peat moss. Place the entirety into sealed containers and store in an area that has temps of between 30-40 degrees F. (-1-4 C.). Once the seeds have stratified, sow the seeds in the spring at a depth of ¼ inch (0.5 cm.) in moist soil.

Printer Friendly Version
Read more about Junipers
<PreviousNext>
Did you find this helpful? Share it with your friends!
FacebookTweetPinEmail
Related Articles
Newest Articles
You might also like…
Additional Help & Information