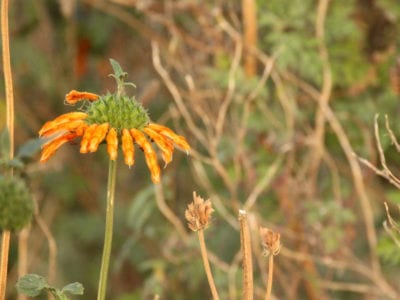 A gorgeous tropical shrub native to South Africa, lion’s ear (Leonotis) was transported first to Europe as early as the 1600s, and then found its way to North America with early settlers. Although some types can be invasive in tropical climates, Leonotis leonorus, also known as minaret flower and lion’s claw, is a popular ornamental in the home garden. Read on to learn about growing Leonotis plants and the many uses for Leonotis lion’s ear plant in the garden.

Leonotis is a fast-growing plant that can quickly reach heights of 3 to 6 feet (0.9 m. to 1.8 m.). The plant consists of sturdy, upright stems that bear rounded clusters of fuzzy, reddish-orange, tube-shaped blooms measuring 4 inches (10 cm.) across. The colorful blooms are highly attractive to bees, butterflies and hummingbirds.

In its native habitat, Leonotis grows wild along roadsides, in scrublands and other grassy areas.

Growing Leonotis plants perform best in full sunlight and nearly any well-drained soil. Lion’s ear plant is suitable for growing as a perennial in USDA plant hardiness zones 9 through 11. If you live north of zone 9, you can grow this plant as an annual by sowing seeds in the garden shortly before the last expected frost in spring for autumn blooms.

Alternatively, plant seeds in containers indoors a few weeks earlier, then move the plant outdoors after all frost danger has passed. If a container-grown plant fails to bloom the first autumn, bring it indoors for the winter, keep it in a cool, bright place and move it back outdoors in spring.

Lion’s ear plant propagation can also be achieved by taking cuttings from established plants in late spring or summer.

Lion’s ear plant care is minimal. Keep newly planted Leonotis moist, but not soggy, until the plant is established. At that point, the plant is fairly drought tolerant but benefits from occasional watering during hot, dry weather. Be careful not to overwater.

Prune the plant after flowering and as needed to encourage more blooms and to keep the plant neat and tidy.