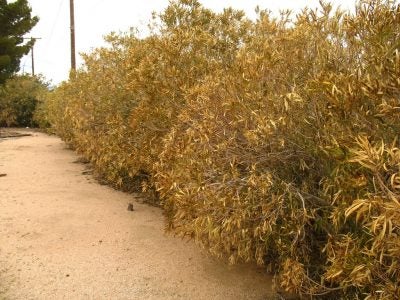 Reasons for Oleander with Yellow Leaves

Treating yellow leaves on oleander starts with pinpointing a cause. Below are the most common reasons for leaf yellowing in oleanders.

Insufficient watering may lead to yellow leaves on oleander

Improper watering, either too much or too little, may be the cause for yellowing oleander bushes. Although oleanders are highly drought tolerant, they benefit from irrigation during long dry spells. However, too much water can harm the plant and may be to blame for an oleander with yellow leaves.

If improper watering is the cause, the plant should soon rebound with proper irrigation. If problems with oleander plants continue, the problem is probably due to leaf scorch.

Oleander leaf scorch was first discovered in southern California, where it quickly decimated oleander bushes. Since that time, the disease has spread to Arizona and is gradually overtaking oleander across much of the southern United States.

Leaf scorch is a bacterial disease spread primarily by small, sap-sucking insects known as sharpshooters. The pests introduce the bacteria into the plant’s stem as they feed. When the bacteria grow in the plant’s tissues, flow of water and nutrients is blocked.

Symptoms begin with oleander leaves turning yellow and droopy before taking on a scorched, brown appearance. The disease, which may begin on a single branch, spreads quickly in warm weather.

The bad news is that the disease is fatal. So far, insecticides have proven to be ineffective and there are no cures for the disease. All varieties of oleander are equally susceptible, and no disease-resistant strains have been developed.

Unfortunately, the only recourse for oleander with leaf scorch is to remove the affected plants. Pruning out damaged growth may temporarily slow the disease and improve the appearance of the plant, but in spite of all your best efforts, death usually occurs in three to five years.