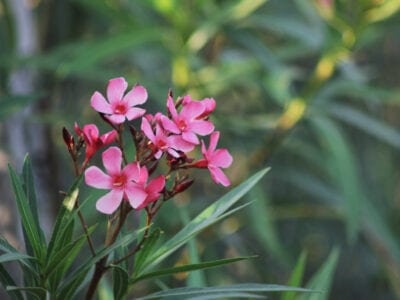 Oleanders are versatile flowering shrubs frequently grown in warmer climates. They are seen so often that some gardeners take them for granted. However, a lethal disease called oleander leaf scorch is now taking its toll on the oleander population. If you’ve never heard of oleander leaf scorch, you probably have questions. What is oleander leaf scorch? What causes leaf scorch on oleander shrubs? Can you treat it? Read on for all the information you need on this topic.

What is Oleander Leaf Scorch?

Oleander leaf scorch is a disease that kills oleander shrubs. Gardeners first noticed the lethal disease in southern California some 25 years ago. It causes scorched leaves on oleander plants. This disease doesn’t kill the plants immediately, but it does kill them. Experts say that more than 90% of infected trees will die over the next three to five years.

What Causes Leaf Scorch on Oleander?

If you want to know what causes leaf scorch on oleander shrubs, you’ll find there are two culprits. The first one is a strain of bacterium, Xylella fastidiosa. This bacterium is what actually attacks oleander leaves. The bacteria feed on the tissues in oleander plants that conduct water, termed xylem. As the amount of bacteria increases, a plant is not able to conduct liquids. That means it does not have access to water and nutrients.

The second culprit is an insect called the glassy-winged sharpshooter. This insect pest sucks the oleander sap, then spreads the lethal bacteria from that shrub to the next.

What are Oleander Leaf Scorch Symptoms?

Over time, the disease spreads from one branch to the next until there are many scorched leaves on the plant. This happens much more quickly when the weather is hot and dry. In time, the plant dies.

How Do You Start Treating Oleander Leaf Scorch?

Unfortunately, treating oleander leaf scorch is not effective. Many oleanders have died or been removed because of this disease. Trimming out the yellowing sections of the oleander may make the shrub look better. However, it is not likely to save the plant since the bacteria has already moved throughout.