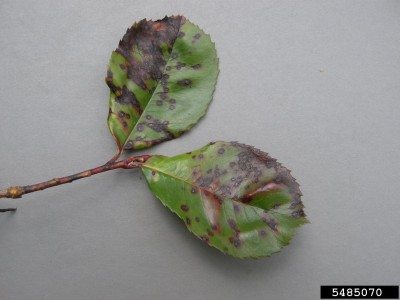 Photinias are large shrubs that grow well in the eastern portion of the United States. So well, in fact, they soon became one of the most popular hedge plants in the South. Unfortunately, with the overuse and close planting of red-tipped photinia, disease wasn’t far behind and resulted in constant, yearly attacks by photinia fungus—also known as photinia leaf spot. The red tips of new growth that made these shrubs so popular are particularly vulnerable to the ravages of photinia bush diseases and over the years, photinia leaf spot has destroyed countless shrubs.

The main culprit among photinia bush diseases is Entomosporium mespili, the fungus that causes photinia leaf spot. Like most plant fungi, this one thrives in the cool, moist environment of the fall and spring and attacks the most vulnerable new growth that gives the shrub its name, red-tipped photinia, and the disease spreads from there. The photinia fungus won’t kill the plant immediately or even during the first season but will return year after year until the constant leaf drop and the depletion of nourishment that results weakens the plant to the point of death.

The first signs of photinia leaf spot are almost unnoticeable. Tiny, round, red spots appear on leaf surfaces, and because of the leaf color of the new growth they attack, the darker red spots are easy to ignore.

In a matter of days, the spots enlarge and eventually become dark, purplish circles surrounding gray, dying tissue. The photinia fungus usually spreads from new growth to old only because of the new leaves making it easier for the spores to take hold.

Once the fungus takes hold in the red-tipped photinia, the disease’s circles continue to grow and merge until large, unsightly “sores” cover the dying leaves. The production of spores can be seen in the black blotches inside the circular damage. At this point, there is nothing to be done to keep the disease from running its course.

The red-tipped photinia disease follows a definite pattern or cycle and it is important to understand this cycle for the treatment of red tip photinia and disease eradication.

The fungal spores spend the winter in fallen, infected leaves or in late-emerging, new growth. These spores are released into the air in late winter or early spring where they land on any nearby photinia bush. Diseases like this one tend to spread from the bottom to the top of the infected plant because the spores can’t travel that far. This inability to move any great distance is also the reason photinia leaf spot may attack a shrub in one area of the yard while another area remains untouched.

During the rainy weather of spring, the spores continue to spread through water splashing from one leaf to the next until the entire shrub is infected.

Is there anything that can be done about red tip photinia disease? Yes, but it’s a matter of prevention rather than cure.

First and foremost, rake up all fallen leaves, and if the shrub is already infected, remove all affected leaves and branches. Cover the area under and around the shrubs with new mulch to cover any leaf parts and photinia fungus spores that remain.

Do not repeatedly trim endangered shrubs to encourage the new, red growth. Keep trimming and shearing confined to the dormant winter months and dispose of all clippings.

Consider replacing dead or dying shrubs with alternatives. A mixed hedge will be more resistant to photinia bush diseases if the susceptible shrubs are placed farther apart. Remember, the spores don’t travel very far. Stagger new plantings rather than creating the traditional wall of shrubs. This will increase light and airflow around the shrub and decrease the conditions in which the fungus thrives.

There are chemical treatments available. Chlorothalonil, propiconazole, and myclobutanil are the effective ingredients to look for in available fungicides. Be aware, however, treatment must begin early and be repeated every 7-14 days throughout late winter and spring and again in the fall when the weather cools.

Red-tip photinia disease can be devastating, but with diligence and good garden housekeeping practices, the fungus can be driven from your yard.