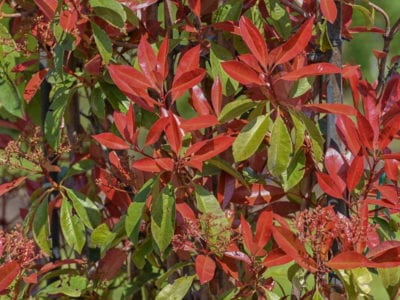 The red tip photinia (Photinia x fraseri) is a popular shrub used as a fence row in the eastern half of North America. The oval leaves of photinia plants start out red but turn into dark evergreen after a couple of weeks to a month. During the spring, the photinia also has small, white flowers that produce red fruits, that often last into the winter.

It is important to provide the red tip photinia with a few basics to maintain a healthy plant and avoid photinia disease. Be sure to provide well-drained soil so that it isn’t too wet. Photinia plants also prefer full sun, but they can tolerate partial shade. It is also important to make sure they don’t grow too dense. Pruning photinia a plant is crucial to the health of the plant. If there isn’t enough room for air to move around the leaves, it can develop photinia disease.

A common photinia disease that affects red tip photinia is caused by a fungus attacking the leaves of the plant. The symptoms are red, purple, or maroon circles on the leaves. It is important to avoid getting the leaves wet if there are signs of disease because it helps spread the mold to healthy leaves. The leaves will fall off, eventually leading to the death of the red tip photinia. It is important to either completely remove dead leaves or cover them with mulch to prevent the fungus from affecting the rest of the photinia plants.

You can promote a new, healthy plant by pruning photinia and making cuttings from another healthy plant. There are three basic ways to create a new photinia plant, using pieces that are three segments, or nodes, long:

When you have new root growth, plant the new plants from the photinia pruning in pots till the roots are stronger. Then you are able to plant a new red tip photinia in an area where it has plenty of room and light to grow strong and healthy.

Printer Friendly Version
Read more about Photinia
Next>
Did you find this helpful? Share it with your friends!
FacebookTweetPinEmail
Related Articles
Newest Articles
You might also like…
Additional Help & Information