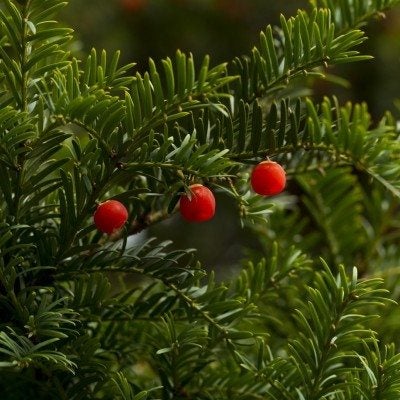 Japanese yew trees (Taxus cuspidata) come in a wide range of sizes, from dwarfs that rarely exceed 2.5 feet (0.8 m.) to large specimens that can grow more than 50 feet (15.2 m.) tall. Read on to find out whether this lovely and versatile plant is right for your garden.

The fact that Japanese yew doesn’t mix with dogs or children is an important limiting factor in the tree’s use. Consider the toxicity of the plant along with the way you and your family will use your garden before deciding to plant Japanese yew.

Japanese yew contains toxins called taxine A and B, which can be fatal if ingested by dogs, cats, horses or people. The primary symptoms are tremors, difficulty breathing and vomiting as well as seizures in dogs. Ingesting the plant can cause sudden death due to heart failure. Any person or animal that has eaten any part of the plant needs immediate medical treatment. Strangely, the plant isn’t toxic to white-tailed deer, which relish the taste of the foliage.

Because of its toxic properties, Japanese yew shouldn’t be planted in family gardens where children and animals play. The bright green foliage and red berries make festive holiday decorations, but you shouldn’t use them in homes with children or pets, or in homes where children may visit over the holidays.

All parts of the Japanese yew are toxic except the flesh of the red berry that surrounds the seed. You can eat the berry, which is called an “aril,” but first strip the flesh away from the toxic seed to eliminate the possibility of swallowing or biting into it.

Japanese yew berries are watery and sweet but have little flavor. In addition, the berries are small. Removing the flesh from the seed so that you can eat it is a lot of work for a small gain. Additionally, the risk associated with ingesting them simply isn’t worth it.

Japanese yew looks its best when planted in groups or masses. They make lovely hedges and foundation plantings. These evergreens have dense foliage that forms a solid screen. When sheared, they have a formal appearance, or you can let them grow into their natural shape for an informal look. They tolerate severe pruning, and you can use them as topiary specimens.

Plant Japanese yew in full sun or partial shade. It is best suited for U.S. Department of Agriculture plant hardiness zones 4 through 7. Care of yews in general is easy as long as the soil is loose and well drained. When planted in compacted soil that doesn’t drain well or in low areas that are constantly wet, the plant has a very short lifespan.