How To Grow A Himalayan Birch Tree 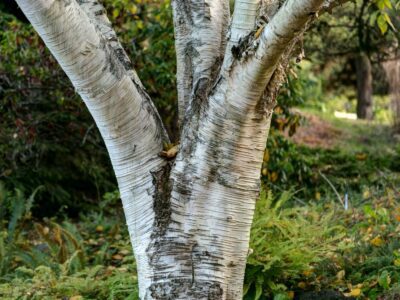 A Himalayan birch tree is one of those trees that few people are acquainted with but, once seen, few can forget. This exceptional tree offers a graceful, open-branched form, outstanding exfoliating bark, and dramatic fall color. If you’d like more information on Himalayan birch trees, read on.

The white barked Himalayan birch is typically grown as an ornamental and known for its brilliantly bright white bark. It thrives in USDA hardiness zones 4 through 7. Whitebarked Himalayan birch (Betula jacquemontii), when heathy, is truly a delightful ornamental. Most birches have a graceful look, but this species is especially so. Its open, pyramidal form is draped with showy catkins – to 5 inches (12.7 cm.) long – in spring.

What about the Himalayan birch leaf? The leaves grow in bright green and tapered. The color darkens to forest green in summer, then transforms to a canary-yellow in the autumn.

Trees can grow to 40 feet (13 m.) tall and half that wide. The bark on the tree peels back to reveal the underbark, giving the tree winter interest.

How to Plant a Himalayan Birch Tree

If you are thinking of growing a Himalayan birch, pick a site with moist, acidic, sandy soil. Full sun locations are best for foliage color though the tree can also grow in partial shade.

This birch tree thrives in cool northern climates where the highest summer temperatures top out at 75 degrees F. They also do best where their root zones are blanketed in snow throughout the winter. In warmer areas, use soaker hoses and mulches to cool down the root zones.

Pruning is generally not required for this tree. However, if it does appear necessary to trim off a broken branch or two, wait until the dormant season to get out the pruners. If you prune in winter or spring when the sap is running, the tree will bleed sap.

When you read that this birch does poorly in regions with hot, humid summers, take note. This is more than a matter of appearance.

When the Himalayan birch is stressed by summer heat and humidity, it is very vulnerable to the bronze birch borer, a wood boring beetle that will girdle the trunk. The birch borer can quickly infect and kill stressed trees. Stressed trees are also vulnerable to Japanese beetles, that can damage the foliage, as well as aphids, birch leaf miner, birch skeletonizer and dieback

Printer Friendly Version
Read more about Birch
<Previous
Did you find this helpful? Share it with your friends!
FacebookTweetPinEmail
Related Articles
Newest Articles
You might also like…
Additional Help & Information