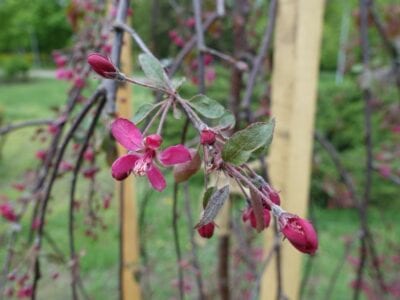 The weeping crabapple “Louisa” (Malus “Louisa”) has crimson buds in spring that open into fragrant, pink blossoms in summer. The woody branches “flow” downward, giving the tree the look of constant motion.

The flowering crabapple tree known as “Louisa” is an ornamental, beloved for its dramatic, weeping shape. It grows to 15 feet (5 m.) tall and wide in U.S. Department of Agriculture plant hardiness zones 4 through 8.

In spring, Louisa puts on an incredible show when it is covered in soft pink flowers. Flowers are the main ornamental attraction, since the fruit themselves are small and less interesting than other crabapple species. The weeping branches cascade down to sweep the ground but pruning weeping crabapple trees will keep them shorter.

The best time to tackle weeping crabapple pruning is late spring before new growth begins. You’ll need pruners and lopping sheers for trimming, but if entire branches have died and need to be removed, you may also need a small pruning saw.

In fact, removing dead branches is the first step in weeping crabapple pruning. Identify dead branches, then prune them back to the trunk. Never cut through the branch collar, since this raised tissue at the branch union helps the crabapple to heal and prevents disease.

After that, trim broken branches back as well, making the cut just above a leaf node. If there are any diseased branches, cut them out a few inches above the diseased area. Don’t forget to disinfect pruning tools between cuts.

How to Prune a Weeping Crabapple

After all dead, broken and diseased branches are removed, the next step in trimming a weeping crabapple is to decide how you want the weeping tree to look. You can prune out individual branches if required to create a uniform shape.

You can also remove up to a third of the canopy to allow air circulation, leaving a small space between branches near the top of the tree. First, trim out any branches that rub or cross one another, and any inward-growing branches. After that, select other branches you can cut back to thin the canopy while keeping it in a uniform shape.

Printer Friendly Version
Read more about Crabapple
<PreviousNext>
Did you find this helpful? Share it with your friends!
FacebookTweetPinEmail
Related Articles
Newest Articles
You might also like…
Additional Help & Information