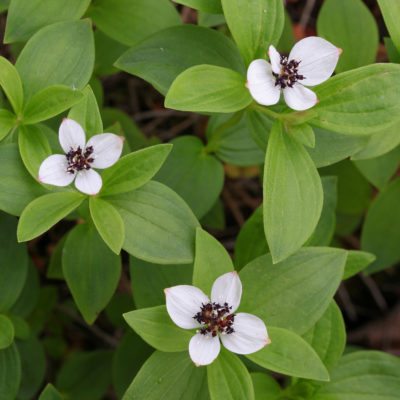 Dwarf cornel plants (Cornus suecica) are small, spreading dogwood shrubs that are truly ornamental. Despite their small size, dwarf cornel shrubs can make your garden lovely all summer long with their flowers and berries. For more information about dwarf cornel dogwood, read on.

Dwarf cornel dogwoods, often called bunchberry but a different species than the bunchberry flowering vine, are a decorative addition to your garden or backyard. These short shrubs spread quickly via runners that grow from the horizontal rootstock. The shrubs grow into a thick groundcover 4 to 10 inches (10-25.5 cm.) tall.

Dwarf cornel dogwood is extremely pretty during the summer, since it bursts into flower in June or July. The flowers are black, which is unique in and of itself. Each blossom sits on a base of four white bracts that are commonly mistaken for flower petals.

In time, the plants produce red, juicy berries. The berries grow in long clusters of shiny fruit on the ends of the stems. The berries won’t kill you, but they aren’t delicious either, so most gardeners leave them to the birds. In the autumn, as the growing season draws to a close, dwarf cornel foliage turns a beautiful, purplish-brown. The colors are vivid and intense.

How to Grow Dwarf Cornel Plants

Dwarf cornel is native to the arctic regions of Europe, America, and Asia, although the range extended south in Europe into Britain and Germany. Its native habitat is often by water, on lake shores, river banks, swamps, and bog edges.

Plant these perennials in a full sun area, although they can also grow well in light shade. Dwarf cornel plants grow best in sandy or loamy soils. They prefer slightly acidic soil.

Printer Friendly Version
Read more about Dogwood
<PreviousNext>
Did you find this helpful? Share it with your friends!
FacebookTweetPinEmail
Related Articles
Newest Articles
You might also like…
Additional Help & Information