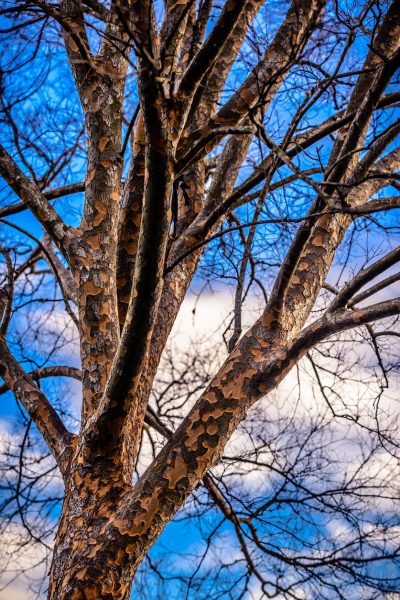 Although lacebark elm (Ulmus parvifolia) is native to Asia, it was introduced to the United States in 1794. Since that time, it has become a popular landscape tree, suitable for growing in USDA hardiness zones 5 through 9. Read on for more helpful lacebark elm information.

Also known as Chinese elm, lacebark elm is a medium size tree that typically reaches heights of 40 to 50 feet (12-15 m.). It is valued for its shiny, dark green foliage and rounded shape. The multiple colors and rich textures of lacebark elm bark (the focus of its name) are an added bonus.

Lacebark elm provides shelter, food, and nesting sites for a variety of birds, and the leaves attract a number of butterfly larvae.

If you’re thinking about planting lacebark elm, growing this versatile tree is easy in well-drained soil– although it tolerates nearly any type of soil, including clay. It is a good shade tree and withstands a certain amount of drought. It is happy in prairies, meadows, or home gardens.

Unlike Siberian elm, lacebark is not considered to be a trash tree. Unfortunately, the two are frequently confused in nurseries.

One strong selling point is that lacebark elm has proven to be more resistant to Dutch elm disease, a deadly disease that often befalls other types of elm trees. It is also resistant to elm leaf beetle and Japanese beetle, both common elm tree pests. Any disease problems, including cankers, rots, leaf spots, and wilt tend to be relatively minor.

There aren’t a lot of negatives when it comes to lacebark elm tree growing. However, the branches sometimes break when exposed to strong winds or laden with heavy snow or ice.

Additionally, lacebark is considered to be invasive in some areas of the eastern and southwestern United States. It’s always a good idea to check with your local cooperative extension office before growing lacebark elm trees.

Once established, the care of Chinese lacebark elms is uninvolved. However, careful training and staking when the tree is young will get your lacebark elm off to a good start.

Lacebark elms don’t require a lot of fertilizer, but once or twice-yearly application of a high-nitrogen fertilizer ensures the tree has proper nutrition if the soil is poor or growth appears slow. Fertilize lacebark elm in early spring and again in late autumn, well before the soil freezes.

It’s critical to select a fertilizer that releases nitrogen into the soil slowly, as a quick release of nitrogen can cause weak growth and severe structural damage that invites pests and disease.