What Are Scout Beetles: Japanese Beetle Facts And Information 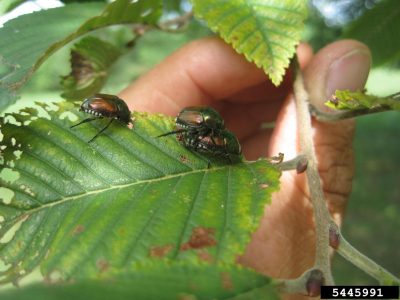 Sometimes, beauty is deadly. This is the case with Japanese beetle scouts. Shiny, metallic green in color with copper wings, Japanese beetles (Popillia japonica) look almost like they have been smelted from precious metals. These beauties aren’t exactly welcome in the garden since they eat almost everything in their path. Keep reading to find out what advance scout beetles are and other Japanese beetle scout facts.

What are Japanese Scout Beetles?

Japanese beetles are a metallic green, oval, and less than ½ inch (1 cm.) long. The copper-colored wings do not entirely cover the abdomen, which has a row of five tufted hairs on either side. Both males and females have this distinctive color and marking, although females are slightly larger.

Newly hatched larvae are about 1/8 inch (3 mm.) in length and a semi-transparent creamy color. Once the larvae begin feeding, however, the gastrointestinal system of the larvae can be seen through the body color. The beetle larvae are the usual C-shape of other grub species.

As you might guess, Japanese beetles originated in Japan, but now make their home in every state east of the Mississippi River with the exception of Florida. First discovered in the States in 1916, the spread of this insect scourge is dictated by temperature and rainfall. Japanese beetles like consistent annual precipitation and summer soil temps of 64 to 82 degrees F. (17-27 C.) and winter soil temperatures above 15 degrees F. (-9 C.).

Japanese beetles don’t discriminate and feed on over 350 species of plants, from fruits, vegetables, and ornamentals to field and forage crops and even weeds. Adults feed on the soft tissue between the veins, leaving a lace-like skeleton (skeletonizing). Trees that have become severely skeletonized become partially defoliated.

The grubs feed below ground on the roots of turf and other plants. This limits the amount of water and nutrients a plant can uptake.

The good news is these pests have only one generation per year; the bad news is that may be all it takes to decimate your plants. Adults begin to emerge from the soil in about mid-June and these first adults become scouts for other Japanese beetles. The first ones to find out where the smorgasbord is in your yard will notify the rest of the adults by marking territory for them to follow. These are the advance scout beetles, which basically run reconnaissance on your garden.

The key to controlling Japanese beetles is to spot the early scouts for the other Japanese beetles. If word gets out, it may be too late, and your garden will become overrun. Adult beetles are most active in the afternoon sun, so do an intensive search for them at this time. If you see any, hand pick them and dispose of them in the manner of your own choosing.

You can also trap beetles, but the downside to this is that the mere presence, trapped or otherwise, of Japanese beetles only attracts other beetles.

Then there’s the option of spraying with insecticides. If you do so, read and follow the manufacturer’s instructions carefully, treat the entire plant, and apply in the afternoon when the beetles are active.

Both the adults and grubs begin to die off in dry soil conditions, so you could choose to withhold turf irrigation during peak adult beetle flight, which may reduce the grub population.

Biological control results tend to be inconsistent. One person says one thing works and another says it doesn’t. That said, since they don’t harm the garden or the environment, I say give it a whirl. Insect parasitic nematodes are said to love Japanese beetle grubs, and milky spore disease targets the young as well. Fungal pathogens, such as Beauveria bassiana and Metarrhiizium, may be employed to reduce the populations as well.

Lastly, you can incorporate plants into your landscape that don’t attract Japanese beetles. Admittedly, this seems like very few, but there are some. Purportedly, members of the garlic and onion family will deter Japanese beetles, as do catnip, tansy, peppermint, and rue.

Also, cedar oil is said to repel the beetles, so try mulching around susceptible plants with cedar chips.