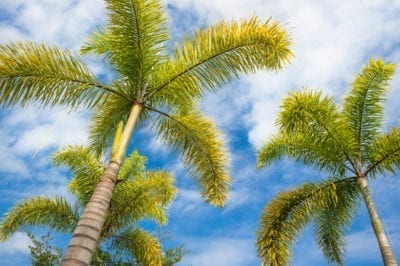 Native to Australia, foxtail palm (Wodyetia bifurcata) is a lovely, versatile tree, named for its bushy, plume-like foliage. Foxtail palm grows in the warm climates of USDA plant hardiness zones 10 and 11 and struggles when temperatures fall below 30 F. (-1 C.).

If you’re pondering the question, “Is my foxtail palm sick,” then you’ve come to the right place. Foxtail palm tends to be relatively problem free, but it is susceptible to certain diseases, often related to issues with care and maintenance or climactic conditions. Read on and learn more about diseases of foxtail palms.

What to Do About Diseased Foxtail Palm Trees

Below are common symptoms of foxtail palm diseases and how to manage them.

Symptoms of crown rot include browning or yellowing of fronds. Above ground, symptoms of root rot are similar, causing wilting and slow growth. Below ground, the roots turn soft and mushy.

This fungal disease begins with small brown spots surrounded by yellow halos. You may be able to save the tree by severe pruning to remove all affected fronds. You can also treat the diseased foxtail palm tree with a fungicide registered for leaf blight.

Leaf blight is sometimes related to an iron deficiency (See information below).

Foxtail palm may be affected by a number of leaf-spot fungi, and it can be difficult to tell the difference. Spots may be circular or elongated, and they may be brown and/or oily in appearance.

Treatment usually isn’t necessary for leaf spot diseases, but if the disease is severe, you can try using a copper-based fungicide. Most important is to water properly and avoid overhead watering. Be sure the tree isn’t crowded and that it has plenty of ventilation.

This is a serious fungal disease that first shows up as withering and collapse of older leaves. New growth is pale green or yellow and stunted. Eventually, shell-like conks grow on the trunk near the soil line, beginning as small white bumps, then maturing into woody, brown growths that can measure up to 12 inches (30 cm.) in diameter. Diseased foxtail palm trees generally die within three or four years.

Unfortunately, there is no treatment or cure for ganoderma and affected trees should be removed as soon as possible. Don’t mulch or chip the tree, as the disease is easily transmitted to healthy trees, not only in your yard but in your neighbor’s too.

Potassium deficiencies: First symptoms of a potassium deficiency include small, yellow-orange spots on the older leaves, eventually affecting entire fronds. It is primarily a cosmetic problem and isn’t fatal. Affected fronds won’t recover, but will be replaced with healthy new fronds. Apply a potassium fertilizer to rebalance nutrients.

Iron deficiencies: Symptoms include yellowing of leaves that eventually turn brown and necrotic at the tips. This deficiency is sometimes the result of planting too deeply or overwatering, and is most common for palms grown in pots. To promote aeration around the roots, use a good quality potting mix containing organic materials, which don’t break down quickly. Apply a slow-release, iron-based fertilizer once or twice every year.