Holiday Tree Info: What Is Frankincense And Myrrh 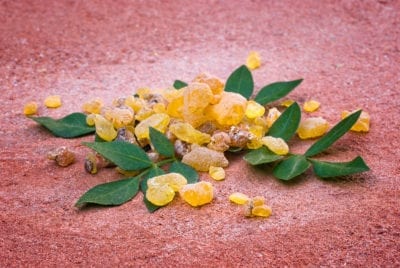 For those folks who celebrate the Christmas holiday, tree related symbols abound – from the traditional Christmas tree and mistletoe to frankincense and myrrh. In the bible, these aromatics were gifts given to Mary and her new son, Jesus, by the Magi. But what is frankincense and what is myrrh?

What is Frankincense and Myrrh?

Frankincense trees are leafy specimens that grow without any soil along Somalia’s rocky ocean shores. Sap that flows from these trees appears as milky, opaque ooze that hardens into a translucent golden “gum” and is of great value.

Myrrh trees are smaller, 5- to 15-foot tall (1.5 to 4.5 m.) and about one foot (30 cm.) across, and referred to as the dindin tree. Myrrh trees have an appearance akin to a short, flat-topped hawthorn tree with gnarled branches. These scrubby, solitary trees grow among the rocks and sands of the desert. The only time they begin to attain any sort of lushness is in the spring when their green flowers appear just before the leaves sprout.

Long ago, frankincense and myrrh were exotic, priceless gifts given to kings of Palestine, Egypt, Greece, Crete, Phoenicia, Rome, Babylon and Syria to pay tribute to them and their kingdoms. At that time, there was great secrecy surrounding the acquisition of frankincense and myrrh, purposefully kept a mystery to further drive up the price of these precious substances.

The aromatics were further coveted due to their limited area of production. Only the tiny kingdoms of Southern Arabia produced frankincense and myrrh and, thus, held a monopoly on its production and distribution. The Queen of Sheba was one of the more famous rulers who controlled the trade of these aromatics to the effect that death penalties were posted for smugglers or caravans who strayed from the tariff levied trade routes.

The labor intensive manner required to harvest these substances is where the true cost resides. The bark is cut, causing the sap to flow out and into the cut. There it is left to harden on the tree for several months and then harvested. The resulting myrrh is dark red and crumbly on the interior and white and powdery outside. Because of its texture, myrrh did not ship well further inflating its price and desirability.

Both aromatics are used as incense and in the past had medicinal, embalming and cosmetic applications as well. Both frankincense and myrrh can be found for sale on the Internet or at select stores, but buyers beware. On occasion, the resin for sale may not be the real deal but rather that from another variety of Middle Eastern tree.