Eating Ginkgo Nuts: Information About The Fruits Of Ginkgo Trees 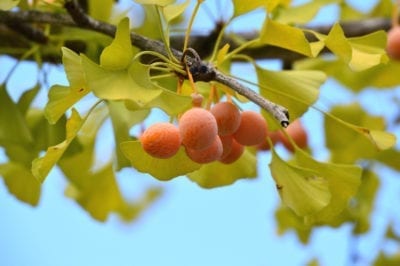 Over the last dozen years or so Ginkgo biloba has made something of a name for itself. It has been touted as a restorative for memory loss. The purported curative is extracted from dried ginkgo leaves. Ginkgo also produces fruit, rather odoriferous fruit. Stinky the fruit may be, but what about eating the fruits of ginkgo trees? Can you eat ginkgo fruit? Let’s find out.

Ginkgo is a deciduous tree, hardy in USDA zones 3-9, that is most closely related to ancient cycads. It is a relic from prehistoric times, dating back as far as the Permian period (270 million years ago). Once thought to be extinct, it was rediscovered by a German scientist in the late 1600s in Japan. A group of Chinese Buddhist monks made it their mission to save and cultivate the species. They were successful, and today, ginkgo can be found growing around the world as an ornamental tree.

As mentioned, the tree does produce fruit, or at least the females do. Ginkgo is dioecious, which means that male and female flowers are borne on separate trees. The fruit is a fleshy, brownish-orange about the size of a cherry. Although the tree won’t produce fruit until it is about 20 years old, once it does, it makes up for the lack by producing prodigiously.

The large numbers of fruit drop from the tree, not only making a mess, but the squashed fruit unleashes a rather unpleasant odor. All agree the aroma is unpleasant but to what degree depends upon the person – some describing it as ripe Camembert cheese or rancid butter, and others comparing it more to dog feces or vomit. Whatever the case, most people who plant ginkgo trees choose to plant male trees.

But I digress, what about eating fruits of ginkgo trees? Can you eat ginkgo fruit? Yes, ginkgo fruit is edible in moderation, and if you can get past the nasty smell. That said, what most folks eat is the nut inside the fruit.

East Asians consider eating Ginkgo biloba nuts a delicacy and ingest them, not only for their flavor, but for nutritional and medicinal properties. The nuts resemble a pistachio with a soft, dense texture that tastes like a combination of edamame, potato and pine nut to some or chestnuts to others.

The nut is actually a seed and is sold in Korea, Japan and China as “silver apricot nut.” They are usually toasted prior to eating and used in desserts, soups and with meat. They are, however, mildly toxic. Only a few seeds should be eaten at a time. The nut, you see, contains bitter cyanogenic glycosides. These break down when the nut is cooked, but it retains the compound 4-methoxypryridoxine, which depletes vitamin B6 and is especially toxic to children.

And, as if the offensive stench and toxic compounds aren’t sufficient to dissuade many, the gingko has another ace up its sleeve. The outer fleshy coating of the seed contains chemicals that can result in dermatitis or blistering similar to poison ivy.

However, ginkgo nuts are low in fat and high in niacin, starch and protein. Once the outer layer has been removed (use gloves!), the nut is perfectly safe to handle. Just don’t eat too many at one sitting.

Disclaimer: The contents of this article is for educational and gardening purposes only. Before using or ingesting ANY herb or plant for medicinal purposes or otherwise, please consult a physician, medical herbalist or other suitable professional for advice.